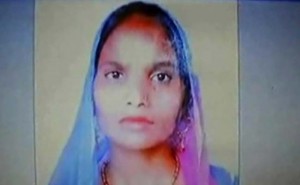 MUZAFFARNAGAR: A 19-year-old girl in Uttar Pradesh’s Muzaffarnagar was allegedly killed by her father over her relationship with a man of a different community, the police said on Friday.
The man, Hasan, has been arrested. He allegedly strangled his daughter Rukhsar on Wednesday night and buried her body at a graveyard.
The police say Rukhsar was in love with a Dalit man in her village but her father was strongly opposed to the relationship. When she refused to stop seeing her friend, Hasan killed her in a fit of rage, the police said.A security guard reported the crime to the police.

“We received a complaint that the man named Hasan has killed his daughter. During investigation, the guard as well as Hasan’s wife confirmed that he and another man killed Rukhsar by strangling her,” said senior police officer Alok Priyadarshi.
Hasan denied killing his daughter but admitted that he buried Rukhsar’s body at a graveyard near his home. “I did not kill her. Three-four villagers did it. Everyone in the village knew she was in a relationship with the Dalit man,” he said.
The police have registered a case of murder based on the guard’s complaint. Rukhsar’s body was dug out and sent for a post-mortem.