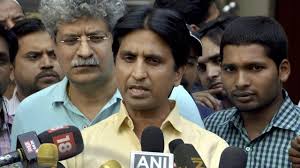 NEW DELHI : Kumar Vishwas attended a meeting of top Aam Aadmi Party leaders this morning and emerged from to say he is not quitting the party.
The senior AAP leader’s key demand of stronger action against a Delhi legislator who accused him of plotting a coup against party chief Arvind Kejriwal, has been met, said Delhi’s Deputy Chief Minister Manish Sisodia.
Mr Vishwas and Mr Sisodia made short speeches to confirm that the latest crisis to hit AAP – which is reeling from three election defeats including the drubbing in the Delhi civic polls last week – has blown over. “We needed talks, that is happening,” said Mr Vishwas, thanking “all who stood by me.”
Mr Sisodia said Amanatullah Khan, who made allegations against Mr Vishwas earlier this week has been suspended. Also, Mr Sisodia said, Mr Vishwas has been handed charge of building the party cadre in Rajasthan ahead of assembly elections next year. Though Kumar Vishwas, a popular Hindi poet and satirist, is a founder member of AAP he has held no top party posts and has only been responsible for overseas funding so far. Mr Sisodia said other responsibilities in the party for Mr Vishwas will be announced later.
An emotional Kumar Vishwas, 46, had on Tuesday evening indicated that he could quit the party. A series of meetings followed that saw Delhi chief minister Arvind Kejriwal reach Mr Vishwas’ home in Delhi suburb Ghaziabad close to midnight. It was an intervention after an advance party of leaders like Sanjay Singh and Ashutosh failed to resolve matters and the meeting turned ugly.

“Kumar Vishwas is an integral part of our movement. He has some grudges. We will convince him,” Mr Kejriwal, who was accompanied by his deputy Manish Sisodia, said last night. They then left for the Chief Minister’s residence on Flagstaff Road, Kumar Vishwas included, to continue discussions.

Mr Vishwas has hinted that Amanutullah Khan is a proxy for Sanjay Singh, Ashutosh and other top leaders. After Mr Vishwas told  at the weekend that Mr Kejriwal is surrounded by “yes men” who are misguiding him, Mr Khan had alleged that he was plotting to overthrow Mr Kejriwal and if he failed would join the BJP, taking with him several AAP legislators.
There has been speculation periodically about Mr Vishwas’ quitting AAP to join the BJP ever since he had praised Prime Minister Narendra Modi a few years ago. He said yesterday that he feels no need to apologise for praising the PM.
Amid rumours of a possible split in Delhi’s ruling AAP, a meeting of its apex body – Political Affairs Committee (PAC) – is currently underway where senior party leaders will decide whether poet-politician Kumar Vishwas will stay in the party or quit.Viswas had accused its leaders of conspiring against him and said that he won`t compromise with his principles and will soon take a call on his future action.ndtv.