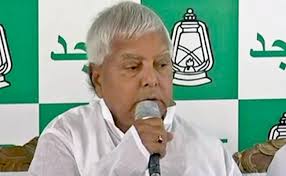 PATNA/DELHI : Former Bihar chief minister and RJD chief Lalu Prasad Yadav has said that he will form a ‘grand alliance’ to stop the ‘saffron brigade’ in the next Lok Sabha elections. Lalu Yadav had revealed how he plans to counter the ‘Modi-wave’ during a meeting of the RJD workers in Rajgir.

The veteran politician, however, denied any rift with current Bihar CM and JDU leader Nitish Kumar.
“I will form a Bihar-like Mahagathbandhan (grand alliance) for the next Lok Sabha elections. To counter communal forces, the RJD will hold a huge rally in August this year.
I invite Mamata Banerjee, Akhilesh Yadav, Sonia Gandhi, Nitish Kumar, Biju Patnaik and others who have secular credentials to join us. Bihar has been an example in defeating communal forces and we will succeed again if we overcome our internal differences,” Lalu had told Media

Attacking Prime Minister Narendra Modi, the RJD chief accused him of cheating people and claimed that the PM was not doing anything for the development of the poor.Main Modi aur Yogi dono ka patta saaf kar dunga (I will finish political prospects of both Modi and Yogi),” he said.

The RJD leader also alleged that Modi and Yogi were only following the RSS agenda of creating a Hindu Rashtra. Taking a jibe at RSS and BJP top brass, Lalu challenged them to reveal the ‘real leaders of their dream Hindu Rashtra’ – Brahmins or Dalits.Lalu also urged Nitish Kumar and the Congress to bury their differences in the larger interest, before denying any division within the ruling grand alliance in Bihar.

The first clarion call for a Grand Alliance against the BJP in the 2019 Lok Sabha elections was made by socialists of all hues at an event on May Day at the National capital , held to commemorate former MP Madhu Limaye and May Day. The possibility of fielding a joint Opposition candidate for the upcoming Presidential elections was discussed at a public platform for the first time.

Janata Dal (United) leader Sharad Yadav hosted the public discussion, titled “Unity of Progressive Forces”, and in attendance were CPI(M) General Secretary Sitaram Yechury, Atul Anjan (CPI), Digvijaya Singh (Congress), DP Tripathi (NCP) and Sudhindra Badhodia (BSP).
‘Progressive forces, unite’
Yechury placed the fight between communal fascism and secular democratic forces in a historical context and argued that the immediate challenge would be to ensure victory in the Presidential polls.“The need of the hour is for secular, progressive forces to unite. The Presidential election is the first big challenge. The country needs a President who will protect the Constitution. We all know that the President acts on the advice of the Union Cabinet. What we need to oversee is whether we will have a President whose supervision will be secular or communal,” said Yechury.
Referring to the recent Uttar Pradesh elections, he said unity among all progressive forces would have ensured a defeat for the BJP. However, Yechury warned that the contours of a possible Mahagatbandhan, or ‘Grand Alliance’, have to be ethically and morally grounded. “An alliance is not just about arithmetic. It is about chemistry and much more,” he said.
‘A political necessity’
Congress General Secretary Digvijay Singh too agreed that an alliance of progressive forces is a “political necessity” but warned against making it a clash of personalities. “What we need to ensure is that the ideological contours of this Grand Alliance are etched out carefully. We need to focus on issues rather than personalities.
What we need to oversee is that we do not end up repeating what happened in 1971 when the towering figure of Mrs Indira Gandhi defeated a united opposition by the simple slogan – Voh kehte hain Indira hatao; mein kehti hoon garibi hatao (They say remove Indira; I say remove poverty),” Singh said. JDU Leader Sharad Yadav said the situation in the country is “grave” and there is no alternative before the Opposition but to unite.
“The ruling party, supported by the corporate media, is creating powerful narratives around non-issues – beef eating, Romeo Squads, etc. The BJP has done everything else but to fulfil the promise of achche din for the people. Kashmir is burning. Our internal security situation is grave,” said Yadav.