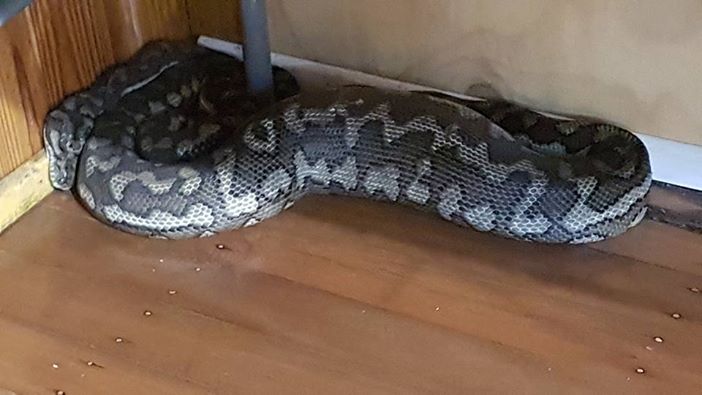 NEW DELHI :  On Tuesday, Chantal Vaughan walked into her gym and discovered a hole in the ceiling. The owner of Bokwa CQ gym in Rockhampton, Australia, she initially thought that a possum had probably fallen through the ceiling and didn’t think much of it – the gym has a possum problem.

Two days later, however, she received a terrifying text from her cleaner, informing her that a massive snake had been found inside the gym. The hole in the ceiling, it turns out, was made by a huge snake falling through it.
Ms Vaughan then put up a picture of the snake and the hole it had made on a local Facebook page called ‘CQ snake identification, relocations and queries.'”I don’t know where he (the snake) was between Tuesday and Thursday but I was teaching classes here and I don’t know where he was hiding,” Ms Vaughan told The Morning Bulletin.
She added that the people who came to relocate the snake had no trouble. “He was really well behaved actually because he was so full, you can clearly see that he had a possum in his belly,” she added.
In better news, the gym probably doesn’t have a possum problem anymore.ndtv.