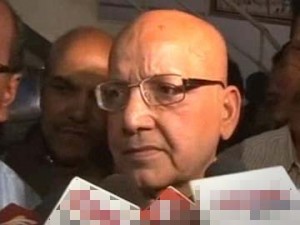 BHOPAL : In a major embarrassment for the Congress, a man named as one of its candidates for the upcoming Lok Sabha polls, joined the BJP today.
Dr Bhagirath Prasad, a retired IAS officer, was declared the Congress candidate from Bhind constituency in Madhya Prasad on Saturday. He was among the 194 nominees who figure in the first list. He had unsuccessfully contested the last Lok Sabha elections in 2009 from the same seat on a Congress ticket.
“After remaining in Congress since then, I realised that there is no situation in the party (Congress) where you can serve the people the way you want. It has a lot of divisions,” Mr Prasad told mediapersons, justifying his sudden switch.
“The welfare of people is possible only through this (BJP) party,” he added, praising Chief  Minister Shivraj Singh Chouhan and the BJP’s prime ministerial candidate Narendra Modi.
Welcoming Mr Prasad into the party, state BJP president Narendra Singh Tomar said that a decision on giving a ticket to the retired bureaucrat to contest from Bhind would be taken only after a meeting of the party’s election committee on March 12.

“I think there is a big money deal with BJP… Yes I am alleging he has taken money from BJP,” said state Congress President Arun Yadav.