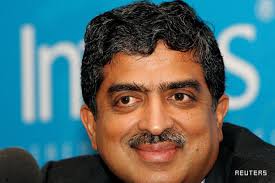 BANGALORE: An IT billionaire, a top bureaucrat, a candidate from prestigious Bangalore South. That is one man, not three. Nandan Nilekani rose to fame as the co-founder of Infosys, a company that made him a billionaire. He quit that lucrative job to take up the challenging and sometimes controversial job of heading the country’s Unique Identification Authority of India (UIDAI). And now – in stage three of his public life – he has taken the plunge into politics and has formally joined the Congress to contest the polls from Bangalore South.
While he is no stranger to public life, Mr Nilekani’s experience at the Congress office in Bangalore today, when he officially joined the party, was something new. Traditional drums, shouting of slogans, garlanding, Mysore turbans – and the general chaos and crowds that tend to accompany political events in the world’s largest democracy.

About this change in work environment, he told NDTV, “I am ready to adapt like I have always adapted. But I am very excited. And I am very confident that I am going to win.” “I think politics needs a change, needs new people, people with a clean image, people with experience in problem solving, people who are local. I satisfy all that,” he added. There had been reports of unhappiness in the local Congress unit at an outsider being given a ticket at such lighting speed. But on this occasion, it was the supporters, not the detractors who turned out. (Congress’s first list for Lok Sabha polls) “100% Congress will win. Nandan Nilekani will become Prime Minister also future, now MP,” said one of the party workers, standing with banners and posters outside the office.
Another added, “Nandan Nilekani is heart of Bangalore, Nandan Nilekani is future of Bangalore. He is future of India also.” Bangalore South has been represented by its sitting MP, Ananth Kumar of the BJP, since 1996. He has won five times in a row, and the BJP wants to hold on to that urban seat by tackling the Nilekani challenge. (Sonia, Rahul, Nandan in Congress’s first list) The BJP has officially complained about posters seen across South Bangalore in that rather confusing time when it was known that Mr Nilekani would join the Congress and be given the Bangalore South ticket – but when it still was not official.
BJP spokesperson in the state, Malavika Avinash, said, “For the last 15 days, Bangalore has been seeing advertisements where Sri Nandan Nilekani proclaims himself to be the giver of about 60 crore Aadhar cards to Indians. He was one of the officers who implemented a union government scheme. It was not his private enterprise that he goes around advertising it like this.” Mr Nilekani may describe himself as an ordinary party worker – but ordinary workers are not welcomed to the party the way he was today. Nor are they given tickets to contest prestigious parliamentary constituencies before they have even formally joined the party. But Mr Nilekani is formally part of the Congress now, and as he takes on veteran Ananth Kumar in Bangalore South, he will know that he has jumped into politics at the deep end.