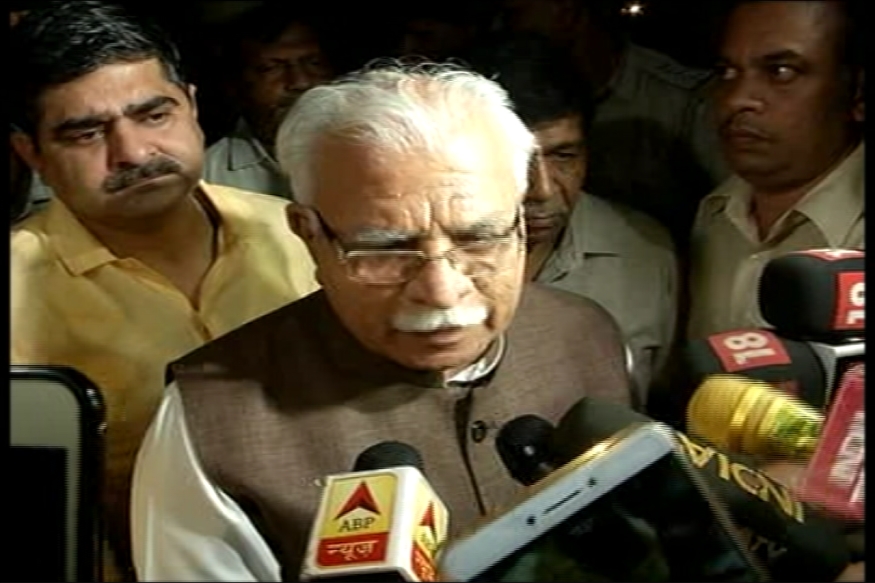 NEW DELHI / CHANDIGRAH : A day after 31 people died and over 250 were injured in violence by supporters of Gurmeet Ram Rahim Singh after he was found guilty of rape, the Haryana Government was lacerated by the High Court, which said: “You let a city like Panchkula burn for political gains.

“”You let the situation escalate. You surrendered to the situation,” said the Punjab and Haryana High Court.The court has said that the property of Dera Sacha Sauda should be seized to pay for the massive damage they have caused.
The Deputy Commissioner of Police in Panchkula, Ashok Kumar, has been suspended.Meanwhile, Haryana Chief Minister Manohar Lal Khattar has been summoned to Delhi.
After Ram Rahim’s conviction by a court in Panchkula, thousands of his supporters went berserk, burning cars, targeting the media, damaging property and clashing with security and policemen. The violence spread fast to other towns in Haryana and parts of Punjab. Some incidents were reported in Delhi.
The Haryana government has been criticised for mismanaging a situation that escalated quickly, despite several warnings. The government has also been accused of allowing at least 1.5 lakh followers of Dera Sacha Sauda, the sect headed by Ram Rahim, to gather at Panchkula and other cities ahead of the verdict.
Chief Minister ML Khattar had acknowledged yesterday that there were gaps. The “lapses have been identified and we are taking appropriate steps,” he said last night, adding: “This should not have happened.”But in another statement, he also appeared to shield Ram Rahim’s followers as he said criminals had infiltrated the crowd of Dera Sacha Sauda devotees.

Meanwhile ,Home Minister Rajnath Singh reviewed the security situation in north India, particularly in Haryana, officials tell. Top officials, including Union Home Secretary Rajiv Mehrishi and Intelligence Bureau chief Rajiv Jain, gave detailed presentations about the situation in Haryana, Punjab, Chandigarh, Delhi, Rajasthan and Uttar Pradesh. National Security Adviser Ajit Doval and chiefs of paramilitary personnel were also present at the meeting.
Fifteen Dera supporters have been arrested since last night, the police said. Searches at all ‘congregation centres’ of the sect across the state have been ordered, said top Haryana bureaucrat Ram Niwas. By 5 pm yesterday, the Army was called in to Panchkula and Sirsa to help regain control after the riots.
Life in Sirsa has come to a standstill as curfew-like restrictions were imposed. Milk supply has been affected in several areas as the agitated followers set a milk plant on fire, located near the sect headquarters. Hotels too are facing the brunt as they are running out of supply of essential items, reports News Agency PTI. Schools, colleges, cinema halls, petrol pumps have been shut as a precautionary measure, while people have been asked to stay indoors.
Currently, the Army is marching towards the premises. The Army is trying to establish contact with the Dera supporters inside in a bid to evacuate them. The Army has clarified that they have not entered the Dera headquarters in Sirsa. Followers of the Dera chief have stayed put on the premises despite appeals by the Army and the authorities to vacate the premises.

The Army, which along with police had put up barricades at entry points of the Dera Sacha Sauda premises following yesterday’s violence. The sprawling Dera campus, which is spread over nearly 1,000 acres, is a township on its own, with schools, sports village, hospital and cinema hall.