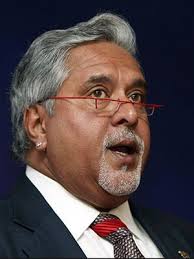 NEW DELHI: Diplomatic passport of industrialist Vijay Mallya has been suspended by the External Affairs Ministry.This has been done on the advice of the Enforcement Directorate, ED. Mr Mallya’s passport has been suspended for a period of four weeks, under Section 10 (A) of the Passports Act.

In a statement, External Affairs Ministry spokesperson Vikas Swarup said that Mr Mallya has been asked to respond within one week as to why his passport should not be impounded or revoked. Mr Swarup said, if Mr Mallya fails to respond within the stipulated time, it will be assumed that he has no response to offer and the MEA will go ahead with the revocation.

Earlier, the ED sought revocation of Vijay Mallya’s passport in connection with money laundering probe in the Rs 900 crore IDBI bank loan fraud case.The ED had said Mr Mallya turned out to be un-cooperative with investigators probing the money laundering case against him.
Mr Mallya’s Kingfisher Airlines has defaulted on loans of over Rs 9,400 crores. The liquor baron has been defying Enforcement Directorate summons.Meanwhile, Congress today accused the NDA government of adopting double standard approach in bringing to book law-defaulters like liquor baron Vijay Mallya and former IPL Chief Lalit Modi. In reply to a question about suspension of Mallya’s passport, Congress spokesman Manish Tewari alleged that the External Affairs Ministry’s action in Mallya’s case reflects Government’s double standard.
He asked, why the passport of Lalit Modi was not cancelled by the Ministry. Mr Tewari said, if the government was so particular and serious in Mallya’s case then how did he leave the country.