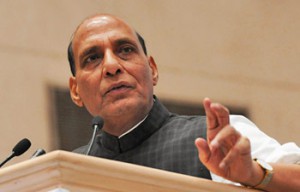 NEW DELHI: Home Minister Rajnath Singh today warned China against constructing roads in Indian territory while maintaining that New Delhi wants cordial ties with its neighbours, according to the Press Trust of India.”China must end its practice of infiltrating Indian territory and construction of roads on our side. We want to maintain good relations with China and it must respect our sentiment,” the minister was quoted as saying at a public rally in Jharkhand.
If Beijing does not comply, he said, there will be no option but to “break” the illicit construction.Last month, China said it was concerned over reports that India plans to build 54  new border posts in Arunachal Pradesh.  India has recently eased curbs on building roads and military facilities within 100 km (62 miles) of the  border in Arunachal Pradesh, so as to speed construction of 6,000 km (3,730 miles) of roads.
In September, India and China agreed to pull back troops ranged against each other in a remote part of Ladkah, ending their biggest face-off on their border in over a year.
The two armies had mobilised about 1,000 soldiers each, each accusing the other of building military infrastructure in violation of existing pacts.That confrontation peaked as  Chinese President Xi Jinping visited India, in a bid to defuse the deep distrust between both countries, despite growing trade and business ties.