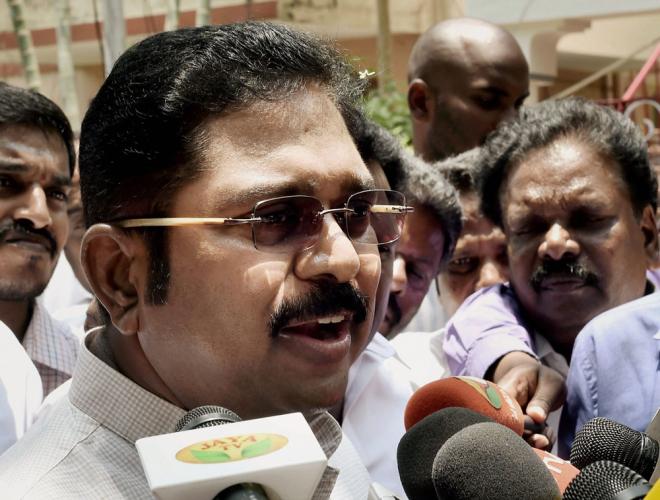 NEW DELHI / CHENNAI : Trouble of AIADMK leader TTV Dinakaran has increased manifold as the Delhi Police served him summons to join the ongoing probe involving him in the Election Commission bribery case.
Dinakaran was booked by the Delhi Police for trying to bribe Election Commission officials through a middleman to buy AIADMK’s ‘two leaves’ symbol.
A Delhi Police team served Dinakaran summons at his Chennai residence late on Wednesday hours after a lookout notice was issued against him after inputs from security agencies that the AIADMK leader may try to sneak out of the country.
There was midnight drama outside Dinarakan’s Chennai house as one of his supporters tried to immolate himself moments after Delhi cops served summons to the AIADMK leader. The bid was thwarted by other supporters prevented the man from immolating himself averting a bigger tragedy.
According to reports, summons were served on him late last night, Reports on Thursday said that Dinakaran has been asked to join the probe on Saturday at the office of the Delhi Crime Branch.

Isolated in his party, TTV Dinakaran “stepped aside” on Wednesday to pave the way for a merger of rival factions led by Tamil Nadu Chief Minister EK Palaniswami and his predecessor O Panneerselvam.
Dinakaran, the nephew of jailed AIADMK general secretary VK Sasikala, is facing a revolt by an influential section of the party led by Palaniswami and a host of ministers, who had on Tuesday night declared the ouster of the once powerful aunt- nephew duo, and extended a hand of friendship to the Panneerselvam camp.
After revolt in AIADMK, Sasikala’s aide Dinakaran ‘steps aside’

Dinakaran, who had earlier in the day convened a meeting of the MLAs backing him, chickened out at the last moment, and called it off, apparently outnumbered by those arrayed against him.

Senior ministers including D Jayakumar and KA Sengottaiyan, who chairs the AIADMK presidium and had hitherto sided with Dinakaran, had questioned the beleaguered leader’s locus standi to convene a meeting of legislators and the party’s district secretaries.

Seeking to avoid any confrontation, Dinakaran said he had “stepped aside” last night itself “in the interest of the party”.”I myself would have announced it (of keeping away from the party) if they had told me about their decision,” he said, referring to Tuesday night’s revolt.

“As I have a responsibility, I’m announcing that the party should not split for any reason. I thank everyone who supported me till now. I will not be the one to have weakened the party and the government,” Dinakaran tweeted hinting that he was ready to walk out of the party.
However, sources said merger talks between the two warring AIADMK factions has run into trouble. The camp backing CM Edapaddi Palanisami has made it clear that he would not step down to accommodate Panneerselvam. Removal of VK sasikala and TTV Dinakaran from the party’s key posts and governance, if the first condition that Panneerselvam had placed for any merger to take place.
Dinakaran, who is facing trouble on multiple fronts, including from the Delhi police which has booked him for allegedly trying to bribe an Election Commission official to clinch the ‘two-leaves’ symbol of the party, frozen by the poll panel, for his faction, also said he had no issues with the rival camps merging together.

He, however, claimed the rebellion against him was out of “fear”.”They (ministers) might have done this (revolt) due to some fear. Maybe there was some dissatisfaction against me. But I don’t know,” he told reporters.
He was apparently referring to the possible angst in the party following income tax raids at Health Minister C Vijayabaskar’s premises ahead of the assembly bypoll to the R K Nagar seat which was countermanded following allegations of bribing and inducement of voters. Dinakaran was the party’s nominee for the election.

“I wonder what the apprehension is about. When they make such sudden announcement there must be some fear,” he said, adding, the revolt was a decision made in a “hurry”.

Dinakaran, however, made it clear that since it was Sasikala who had appointed him to the post, he would decide on the next course of action only after meeting her. He wondered why there was the question of his resignation when he had already “stepped aside”.

Meanwhile, Panneerselvam, a staunch loyalist of the late Chief Minister J Jayalalithaa, described the revolt against the Sasikala family as the “first success” of his “dharma yuddh” (holy war).

Panneerselvam said he had launched the “dharma yuddh” with the help of his supporters, including MPs and MLAs, in an effort to ensure that the AIADMK did not go into hands of Sasikala’s family.

Panneerselvam had filled-in for Jayalalithaa as Chief Minister thrice in the past, twice when she had to go to jail in corruption cases and once when she was on her death bed. He had claimed he was coerced to step down by Sasikala after Jayalalithaa’s death.

Though the Palaniswami and Panneerselvam camps have shown inclination for the merger of the two factions, there have not been any direct talks between them so far.
Dinakaran, against whom the Delhi police has issued a lookout notice for allegedly trying to bribe an Election Commission official, said he had no intention to fight with people who are like his “brothers.” “I will never go against the AIADMK,” he said.

He indicated Sasikala has not yet been apprised of the developments. “How can someone inside the jail be informed,” he asked.