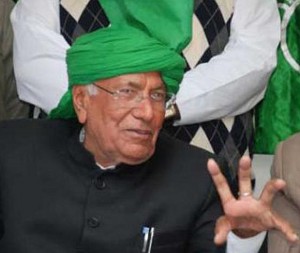 NEW DELHI : The Delhi High Court on Sunday extended till September 19 the interim bail of former Haryana Chief Minister Om Prakash Chautala who has been sentenced to 10 years in prison in the teachers recruitment scam case.
A bench of Justice Siddharth Mridul also extended till September 19 the interim bail of former IAS officer Sanjiv Kumar, who despite claiming to be the whistle-blower in the case, was also convicted and sentenced to 10 years in prison along with Chautala.
The court extended Chautala’s interim bail as CBI sought time to verify his medical report of September 3 given by Medanta Medicity hospital in Gurgaon, Haryana.”Medical report dated September 3 of Medanta Medicity, Gurgaon, with respect to the applicant (Chautala) has been handed over in court today. CBI seeks time to file status report.
“Let status report verifying facts stated in the medical report be filed on or before next date of hearing. Interim order to continue on same terms and conditions,” it said.In Kumar’s case, the court called for a fresh medical report from the Institute of Human Behaviour and Allied Sciences (IBHAS), where he is currently admitted for Post Traumatic Stress Disorder (PTSD), regarding his current health condition.
“Medical report dated August 22 received from IBHAS with respect to petitioner (Kumar). Director of IBHAS is requested to submit report with respect to current medical condition of petitioner within two weeks. Interim order to continue till next date,” the court said.
On July 11, the high court had reserved its verdict on the appeals of 55 convicts, including the Chautalas, in the Junior Basic Teachers recruitment scam case.Delhi High Court had on Friday issued a notice to CBI on a petition seeking immediate cancellation of Chautala’s bail on the grounds that he would “misuse the grace period of 17 days given to him to surrender” by taking part in campaigning.
A special CBI court on January 22, 2013, had convicted and sentenced Chautala, his son Ajay and eight others to 10 years in jail for their role in the illegal recruitment of 3,206 junior teachers in 2000.
Among the others convicted in the case, 44 were sentenced to four years in jail while one was handed a five-year prison term. All of them were found guilty of cheating, forgery, using fake documents and conspiracy under IPC and of abusing their official position under the Prevention of Corruption Act.
Chautala was chief minister for six months between 1980 and 1990, five days in July 1990 and for 14 days in 1991. Finally, he had a complete five-year tenure starting in 1999.