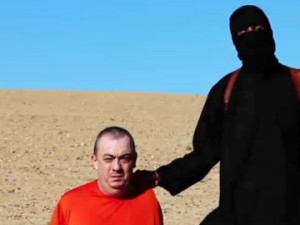 LONDON: Prime Minister David Cameron has asked his spy chiefs to find Islamic State executioner ‘Jihadi John’ so that he could dispatch special forces to kill or capture the masked man who beheaded the latest British hostage.
The Prime Minister has stepped up the hunt for British aid worker Alan Henning’s murderer, who appears in Islamic State’s beheading videos and has a British accent.
He summoned the heads of MI5, MI6 and GCHQ – the main British spy agencies – to his Chequers country retreat on Saturday and told them he wanted them to provide him with targets for a special forces raid on the Islamic State kidnappers, The Sunday Times reported.
The meeting came 12 hours after the terrorists released a video showing the Britain-born terrorist beheading Henning, a 47-year-old former taxi driver from Salford.Cameron stepped in as Henning’s brother-in-law, Colin Livesey, and one of his friends accused the government of failing to do enough to save him.
Henning’s widow Barbara said the family were “numb with grief” at his murder and thanked those who had campaigned for his release.
But Livesey, her brother, said he was “angry” with the government and criticised their handling of the case and that of David Haines, the Scottish aid worker who was beheaded last month.”They could have done more when they knew about it months and months ago,” he said.
“Just the same with David Haines as well – I don’t think they did enough for him either.”Branding the terrorists “scum,” he said he prayed they “get what’s coming to them.”Majid Freeman, a friend of Henning who was on the same aid convoy when he was kidnapped, said: “We have been pressuring the government into doing something to secure his release, but they abandoned him. The British government left him out there.”
The newspaper said that intelligence chiefs have supplied Cameron with information about the terrorist cell holding the remaining hostages.But the information on their whereabouts is not detailed or reliable enough for him to allow an SAS raid because the terrorist group is moving around the Syrian desert.
Henning was abducted minutes after his aid convoy entered Syria on December 26. He was the fourth Western hostage to be killed by Islamic State since mid-August, following two American journalists and another British aid worker.