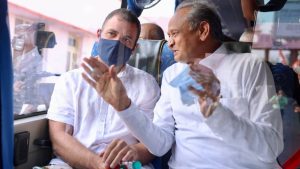 NEW DELHI/ UDAIPUR:  Congress leader Rahul Gandhi arrived in  Udaipur on Friday morning to attend the party’s three-day Nav Sankalp Chintan Shivir. Congress’ three-day Chintan Shivir which is all set to begin today in Udaipur and will emphasize discussions over ‘communal polarization’, farmers’ issues and strengthening the party for the upcoming elections, informed party sources.
During the program, the Congress leaders will discuss the Centre-State relationship, the situation of the northeastern states, the Jammu and Kashmir issue, and communal polarization, said sources.
Around 400 senior Congress leaders from across the country are expected to take part in the brainstorming session. Congress is going to hold a ‘Chintan Shivir’ in Udaipur under the leadership of its interim President Sonia Gandhi to hold discussions on party organization, and to formulate a strategy to challenge the BJP in the upcoming 2024 general elections.
The top leaders demanded that Rahul Gandhi should take over the post of Congress President in the Congress Working Committee (CWC) meeting held on March 14. In the meeting, senior Congress leader Adhir Ranjan Chowdhury told Wayanad MP that he should accept the post of President, according to sources.
Sources further informed, “Rahul is ready to consider the post. After this, a proposal came in the meeting to hold the election of the President of August-September. However, it was then decided that the ongoing process cannot be preponed.” After the defeat in the 2019 Lok Sabha polls, Rahul Gandhi resigned from the post of Congress president and Sonia Gandhi turned up to become the party’s interim president. Discussions and crucial decisions are likely to be taken regarding the post of the Congress president during the Chintan Shivir in Udaipur.

The Chintan Shivir is being held in the backdrop of the party’s drubbing in the elections to five state assemblies earlier this year. The party has witnessed several electoral losses in the elections held in the past eight years. Congress has also seen the exit of some of its prominent faces. The Chintan Shivir will commence on May 13 with Sonia Gandhi’s address to the people and will conclude on May 14 with Rahul Gandhi’s speech.

An age bar for party posts and a “One Family, One Ticket” rule – with a loophole that exempts the Gandhis among others – is on the Congress agenda as it begins a three-day “Chintan Shivir” in Rajasthan’s Udaipur today in the shadow of poll debacles. Around 400 leaders, including Sonia Gandhi, Rahul Gandhi and Priyanka Gandhi Vadra, are attending the Chintan Shivir called in the aftermath of the party’s five-state debacle in recent elections. “Big changes” are in store, said Congress leader Ajay Maken.
The Congress said there was unanimity on bringing back the “One Family, One Ticket” rule, which bars more than one person from a family from contesting elections, but hinted in advance that the Gandhis would be spared.

“There is unanimity on this rule. If family members still want to contest them they should have been active for five years,” said Congress leader Ajay Maken. Asked what it meant for the Gandhis, he replied: “They are active for the last five years. Priyanka Gandhi started working formally for the party in 2018.” The rider to the rule, which leaves all three Gandhis eligible to contest, signals a loophole that reinforces critics’ views that the party will attempt no more than cosmetic changes at a time there are calls for a big overhaul.

Amid attempts by the Congress to reboot ahead of crucial polls, the party is also considering a plan to reserve half the party positions at “every level in the Congress” for those below 50. “No person should be in a post for more than five years and there should be a cooling off period for three years,” Mr Maken said. An assessment wing will monitor the performance of the leaders. Congress leader Manick Tagore, a Rahul Gandhi loyalist, had told NDTV on Thursday: “The party has to represent the youth since 60 per cent of India’s population is below 40, this has to reflected in all our party units and posts we hold too.”
The Congress also plans discussions on “communal polarisation” and preps for state polls and the 2024 national election, leaders say. Six groups have been formed, and they will take up subjects related to the organisation, the economic and political situation in the country, social justice, farmers and youth. “Every group will have 60 to 70 people. No paper discussion will take place,” news agency ANI quoted sources as saying. Amid calls by a section of the party for his return as Congress president, Rahul Gandhi is expected to address the meeting on the last day.
(Bureau Report with ANI-Media Inputs) 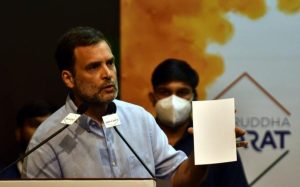 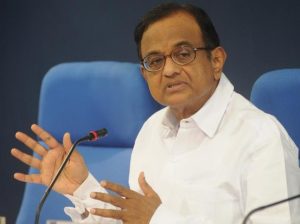 Next post State of economy cause of ‘extreme concern’: P Chidambaram