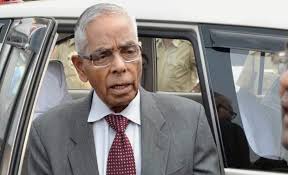 KOLKATA: As West Bengal Governor M K Narayanan was questioned by a special CBI team yesterday over Agusta Westland VVIP helicopter deal, it not only sent a political message to former national security advisor to quit, but it indirectly sent a hint to political establishments that this central agency could be used in major probe into money laundering scams now clouding the political sky of Bengal.

Only recently Saradha Chit Fund chief now in Enforcement Directorate (ED) custody was quoted having told CBI  team: “I couldn’t pay up my investors as I had to pay the politicians of every colour (read Trinamool Congress and CPI(M) heavily since 2011 assembly elections) and doomed my business.’’

For S Sen despite his personal bad habits was expanding his business fast but made bad political investments.

According to intelligence sources, the CBI team who took note of Sen’s confessions promptly though dropped no hints whether they would question the leaders Sen may have named during interrogation.

According political observers, M K Narayanan who might again be questioned by CBI will leave further hints for TMC and CPI(M) leaders  whose names were also recorded by ED and CBI, “though it’s an old Congress way to use the agency for political purpose, immediately BJP-led NDA may stick to it. And that adds to fear of post-poll violence still continuing and balance is slightly tilting against BJP workers in Bengal.