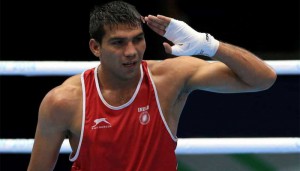 NEW DELHI : In a startling turn of events, Indian boxer Manoj Kumar on Wednesday slammed head of Arjuna Award selection committee Kapil Dev for not supporting him.
Manoj, who received the prestigious Arjuna Award from Sports Minister Sarbananda Sonowal today, looked really agitated as he spoke about the award committee ignoring him earlier.
Speaking to a leading English news channel, he said, “My work is to do boxing. According to my achievements i simply deserved the award but they (the committee) sidelined me. I don’t know who made those false allegations against me of doping and I had been ruled out.”
He was clearly upset with Kapil, whom he said had cut the phone while he tried to convey his message once.
“When I called Kapil Dev, the first question he asked me that ‘do I know you’. Then I informed him ‘I am boxer Manoj, who won a gold medal in CWG. And my name has been removed from the Arjuna Award list and you are giving the award to a bronze medalist.’ But he cut the phone after saying that I don’t want to talk about all these things.”
Manoj was earlier denied the award by the Kapil Dev-led selection committee even as another boxer Jai Bhagwan was recommended for the coveted honour.Feeling “insulted”, Manoj approached the Sports Ministry officials, who he said, had assured him that his name would be added to the list in a review meeting.
But after being snubbed for a second time in the review meeting, Manoj took the legal route and filed a case in the Delhi High Court. He won the case and that led to the ministry accepting his nomination for the award.
The ministry, through its counsel, admitted in the court that Manoj was initially not considered for the award by the committee as they mistakenly believed that he was involved in a doping case.