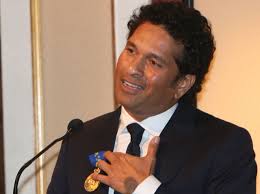 NEW DELHI : Indian batting legend Sachin Tendulkar on Wednesday reiterated his support for ace Indian boxer Sarita Devi and also urged the nation to support her.Tendulkar, who met sports minister Sarbananda Sonowal earlier in the day, appealed to countrymen to stand by her.
“We just want the entire nation to be behind Sarita Devi and move forward in the right direction,” he said.”Being a fellow sportsperson, I fully understand what Sarita Devi must have felt. Must have been a difficult moment for her,” the 41-year-old added.
The sports minister also assured help for the female boxer.”We are with Sarita Devi. Everyone has expressed their serious concern about the matter,” Sonowal said.Sarita Devi, who is currently serving a provisional suspension, had earlier too found support from the batting maestro who had written a letter to the Sports Minister urging him to support her and ensure that her career is not terminated prematurely.
In a letter to Sports Minister Sarbananda Sonowal, dated November 15, the iconic batsman said he is disconcerted by the reports that Devi faces a potential ban threatening her career.”I would urge you to kindly look into this issue urgently and ensure that she is given competent support so that her career is not threatened and ends in a premature manner,” Tendulkar wrote.
Devi lost in the semifinals of the women’s lightweight (60kg) competition at Incheon, South Korea, in September, and tried to give her medal to her opponent at the presentation ceremony as a protest.
Devi, upset with the controversial decision, refused to bend down to let the medal be placed over her neck. She then took the medal and slipped it onto the neck of Park Ji-Na, who had been declared the winner of their semifinal bout.The South Korean boxer, an eventual silver medalist, tried to give the bronze medal back to Devi, then left it on the podium.