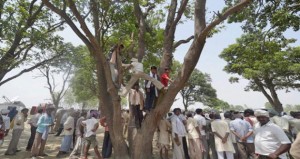 LUCKNOW: The Central Bureau of Investigation (CBI) today sought permission from the Badaun gang-rape victims’ parents to conduct polygraph test on them, reports said.According to CBI sources, the investigation body will carry out a lie-detector test of the family members of the rape victims. As per the sources, only after getting a court’s approval, will the CBI be able to carry out the lie-detector test.
CBI may have decided to conduct the lie-detector test in light of the statement made by Uttar Pradesh DGP AL Banerjee’s that the rape of one of the victims was not confirmed and that property could be one of the motives behind the heinous incident. However, the autopsy report confirms that the minor girls were raped and they died due to strangulation.
On 27 May, two sisters aged 14 and 15 were allegedly raped and later hanged from a tree in Katra Sadatganj village of Badaun district, causing a national uproar.
However, all the six accused, including a policeman, have been arrested in connection with the case. As pressure continued to mount on the Akhilesh Yadav government in Uttar Pradesh over a spurt in crimes against women in the state, the CBI took over the probe of Badaun gang-rape and murder case on 12 June.
Later, CBI had also registered a First Information Report (FIR) in the alleged rape case. On 6 June, a special investigation team (SIT) of police in Uttar Pradesh’s Badaun district was also constituted to probe the gang-rape and murder of the two minor girls.
The victims’ family and political parties like the Congress and the Bahujan Samaj Party had advocated CBI probe into the case. The Centre had also recommended CBI probe into the horrific incident.The victims’ families had also alleged that four men from the village had abducted the girls when they had gone out of their house at night to relieve themselves. They allege that the accused gang-raped the cousins before killing them and hanging them from a tree.
Three of the accused belong to the same community as the state’s CM, Akhilesh Yadav; so are the two cops, who were also arrested after the families accused them of not acting on their complaint after the girls went missing.