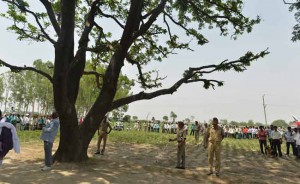 BADAUN: The two teenage cousins found hanging from a tree in a small village in Badaun in Uttar Pradesh in May committed suicide and were not gang-raped and murdered as was thought all this time, the Central Bureau of Investigation has reportedly concluded.
The girls, aged 14 and 15, were found hanging from a mango tree near their village on May 28, a day after they were reported missing. Autopsies had indicated that they were raped before they died.All five men arrested in the case, including two constables, were let off on bail in September, after the CBI refused to file a charge-sheet against them.
The girls’ families had alleged that they were kidnapped, gang-raped and murdered by five young men of a family in the village. They also alleged that the police refused to help when the girls went missing as they wanted to protect the accused, who belonged to a higher caste.
The case took a different twist after the CBI took over the investigation in June amid global outrage over the deaths. The agency said the report confirming rape was unreliable and was granted court permission in July to exhume the teenagers’ bodies for another  autopsy. The attempt was, however, abandoned as the graves of the girls along the River Ganga were submerged after heavy rain.
The agency later said the girls were not sexually assaulted. Their assessment was based on forensic tests at the Hyderabad-based Centre for DNA Fingerprinting and Diagnostics and a medical board, which had dismissed the rape theory as “highly unlikely”.
The CBI subjected the girls’  families, witnesses and the accused through lie-detector tests. One of the main witnesses was also found to have lied about seeing the girls being dragged away by a villager.