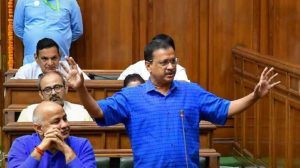 NEW DELHI : NEW DELHI : The special assembly session in Delhi commenced on Monday. Chief Minister Arvind Kejriwal tabled a confidence motion, saying it was meant to prove that ‘Operation Lotus’ could have been successful in other states but failed here as all AAP MLAs were “hardcore honest”.“It is being said they (BJP) broke away a number of MLAs. I received phone calls,
People asked me if everything is alright. “The BJP tried to buy our legislators too. Through this confidence motion, we wanted to show Delhiites that no AAP MLA has been bought. The “Operation Lotus” – a plan to topple the AAP government in Delhi – has failed,” he said.
The day started with a noisy showdown as BJP legislators raised slogans against the ruling AAP and demanded discussions on various issues, including the Excise Policy case. Just before the trust vote, BJP MLAs were marshalled out of the Delhi assembly for creating a ruckus.
The AAP chief had alleged that the BJP had targeted 40 AAP MLAs and offered Rs 20 crore to each of them to switch sides. “This confidence motion is needed to show that our MLAs are honest. I challenge them to break even one MLA from AAP,” he said. “We have heard that they have offered 50 crores per MLA. In Delhi, they have offered 20 crores,” the AAP CM said. “When the government of Jharkhand falls, you just watch out  petrol and diesel rates will go up again in 15 days.”
“If there is any government that is most corrupt post-independence, it is the current central government,” he said addressing the House. HC to Hear Delhi Minister’s Plea Challenging Provision of Seeking Centre’s Nod to Visit Abroad “They did ‘nautanki’ on kickbacks on liquor, they did not find anything in raids. Now, they have orders from top, that there will be no talk on liquor so they have started talking about schools,” he added.

AAP MLA Duregesh Pathak further alleged in the Assembly that LG V K Saxena had pressurised his employees to exchange demonetised notes worth Rs 1400 crore in 2016 when he was KVIC chairman. “When he was KVIC chairman, demonetisation happened and a cashier working there has given in writing that he was forced to carry out exchange of notes. It is unfortunate that he was suspended. Those who levelled all dismissed. But we want a probe in this. There is a news report also and there are statements by the affected employees,” Pathak said.Raising slogans against the LG and carrying placards, AAP MLAs came into the well of the House they. were demanding Saxena’s removal from the post of Delhi Lieutenant Governor.

At the beginning of the session, the House speaker disallowed a calling attention notice served by BJP leaders, leading to protests by several BJP MLAs. Following this, Deputy Speaker Rakhi Birla suspended all BJP MLAs for the entire day once again. They were subsequently marshalled out. BJP MLA Vijender Gupta was carried out by a marshal.
Meanwhile, at a press conference following this, the BJP alleged a scam in the Delhi education department, saying the city government increased the budget for the construction of classrooms in its existing schools, ignoring the Central Public Works Department’s guidelines.
“Corruption is in the DNA of Arvind Kejriwal. It’s not AAP sarkar but PAAP ki Sarkar..
Mr Kejriwal alleged that the BJP has “bought” 277 MLAs till now to topple various state governments across the country, including Madhya Pradesh, Bihar, Goa Maharashtra and Assam. “The party will now try to dislodge the Jharkhand government in the next 15 days,” he said.
Last week, Delhi’s Deputy Chief Minister Manish Sisodia had claimed that the BJP had offered to “shut all cases” against him if he quit the AAP and crossed over.  AAP has 62 MLAs in the 70-member Delhi assembly. The BJP has eight and needs 28 more for a majority.

The CBI recently raided Mr Sisodia in a case related to alleged irregularities and corruption in Delhi’s liquor policy which was introduced earlier this year and then rolled back. Mr Sisodia is number one on a list of 15 accused named in the CBI’s FIR on liquor policy violations. The Enforcement Directorate has also filed a money laundering case against him.
The FIR is based on a reference from the Lieutenant Governor, who had accused AAP of bringing the Excise Policy “with the sole aim” of benefiting private liquor barons for financial benefits to “individuals at the highest echelons of the government. Mr Saxena has alleged various discrepancies in the functioning of the Delhi government.
AAP has said that the 2024 general election is set to be a contest between Mr Kejriwal and Prime Minister Narendra Modi and accuses the BJP of misusing central agencies to try and stop the AAP leader because of his rising popularity and “commendable” work in the education and health sector.
The BJP has denied AAP’s allegations, accusing it of trying to divert attention from the corruption in its government. The party also dismissed AAP’s claim of being the main challenger to the BJP in the 2024 general election, saying, AAP made tall claims earlier too but could not stand before PM Modi.”
(With Bureau Inputs).