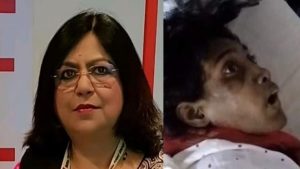 RANCHI: Suspended BJP leader and wife of a retired IAS officer, Seema Patra was today arrested by the Jharkhand police on allegations of torturing her 29-year-old tribal help Sunita, Seema Patra was caught after her son revealed the horrific abuse to his friend, a government officer, and asked for help. The BJP suspended Seema Patra on Tuesday after a video of her domestic help accusing her of torture went viral.
Ms Patra was a member of the national working committee of the BJP’s women wing and her husband, Maheshwar Patra, is a retired IAS officer. Sunita, the help, had been working for her for 10 years.
In the video, Sunita is seen on a hospital bed with wounds on her body and face. The 29-year-old woman could barely speak as she alleged that she was held captive, tortured and beaten with rods and an iron pan. Many of her teeth were missing and she couldn’t sit up. She alleged that she was forced to lick urine off the floor. “She also broke my teeth with an iron rod,” Sunita said.

She was allegedly not given food or water for days. It was Ms Patra’s son Ayushman who saved her, she said. “It is only because of him that I am alive,” she said in the video, weeping. Sunita was rescued last week after Ayushman, apparently disturbed by the abuse, confided in a friend, shared videos and asked him to help. His friend Vivek Anand Baskey, a government officer, went to the police.Police sources said. The now suspended BJP leader was arrested after the Ranchi Police had rescued the woman from Patra’s residence last week acting on a tip-off from a government employee.

The statement of the domestic help was recorded before a magistrate by the Jharkhand Police after she was rescued from Patra’s residence last week. Patra had allegedly kept the woman captive in her residence in Ranchi’s posh Ashok Nagar area for almost ten years.

Governor Ramesh Bais too on Tuesday asked DGP Neeraj Sinha as to why no action has been taken against suspended BJP leader. Members of various tribal outfits visited Rajendra Institute of Medical Sciences (RIMS) where the woman is undergoing treatment and met her on Tuesday.
While being led away by the police, she told the media she was framed. “I am innocent,” she said. Seema Patra allegedly admitted her son to a hospital for exposing her. “He was unwell,” she claimed when asked why her son was in hospital.
Ms Patra admitted her son to Ranchi Institute of Neuro-Psychiatry and Allied Sciences, allegedly when she found out he was trying to help Sunita. After rescuing her from the Patras’ home, the police took her to Rajendra Institute of Medical Sciences (RIMS) for treatment, officials said.
(With Bureau Report)