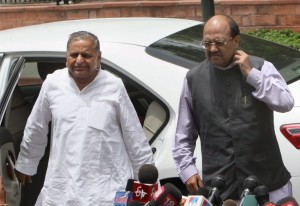 LUCKNOW: As speculations are getting rife about Rajya Sabha MP Amar Singh returning to Samajwadi Party, the upper house MP, who had to face an acrimonious expulsion from the party was seen on Tuesday with his former mentor Mulayam Singh Yadav.
The Rajya Sabha MP today met SP supremo Mulayam in Lucknow. Reports say that the two leaders are meeting to reach a consensus on the former’s return to the party fold.However, Singh dismissed all reports of him joining SP. Reacting to his meet with Mulayam, the Rajya Sabha MP said: “It was an informal, cordial meet. I am not joining Samajwadi Party”.
Earlier this month, Singh shared dais with Mulayam and Uttar Pradesh Chief Minister Akhilesh Yadav after a gap of four years when he was expelled from the Samajwadi Party.It was reported that Mulayam had himself invited Singh for the inauguration of a sprawling park in posh Gomtinagar.
As the two old friends met murmurs had begun in the political circle of their reunion.Interestingly, Amar Singh’s bete noire and state Urban Development Minister Mohd Azam Khan chose to stay away from the event.A senior leader privy to the developments told IANS that a meeting took place between Amar Singh and Akhilesh Yadav at a London hotel when the latter went on a family holiday. Things moved thereafter and the “Netaji” – as Amar Singh is known – gave his nod for a re-union.
The Samajwadi Party perhaps wants to win back the industrialist support base through Amar Singh, who is also known to have close ties in the media and entertainment world.But Amar Singh’s critics like Mohd Azam Khan, the state’s urban development minister, continues to be a stumbling block.
Khan has called Amar Singh a “pimp” and a “joker” in the past and is likely to be a major dissenter in case the party plans to take back Amar Singh. Not surprisingly, Khan gave the event where Amar Singh was present a miss.