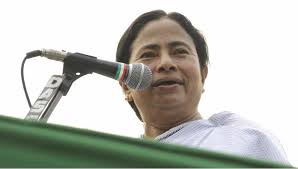 SINGAPUR: West Bengal Chief Minister Mamata Banerjee on Tuesday held talks with Singapore Prime Minister Lee Hsien Loong here. The West Bengal CM gifted several handicrafts from her state, such as kantha stitch works, balaposh, jute bags, to the Sngaporean PM. After the meet, Banerjee announced that West Bengal and Singapore will jointly set up a Business Centre in Kolkata. “It will come up in 18 months,” said the CM.
Banerjee also urged the Singaporean PM to make Kolkata a part of the celebrations of diamond jubilee of Indo-Singapore ties.
We chose Singapore for investment destination because of geographical, historical, political and cultural reasons, added Banerjee. Banerjee, now on a five-day visit to the sovereign city state to tap investment, is now scheduled to meet a Bengali delegation from the Jurong Township and visit the INA Memorial.
An industrial summit will be held on Wednesday where Bengal’s industrialists would detail the advantages of investing in the state to their Singapore counterparts.The Chief Minister will tour urban management facilities and tourism facilities in Singapore on Thursday.The visit comes in response to an invitation extended by the Singapore government and Changi Airports International, the latter involved in setting up the erotropolis project – involving setting up a new airport along with a township, IT and logistics hub – at Andal of Burdwan district.
Banerjee reached the South East Asian island country, regarded as one of the world’s major commercial hubs, early Monday.
The delegation accompanying the CM includes 12 officials and staff from the state secretariat and around 52 business leaders from the state.Among those in the team are Finance and Industries Minister Amit Mitra, senior bureaucrats and captains of the industry including Ambuja Neotia chairman Ambuja Neotia Group chairman Harshavardhan Neotia, RP-Sanjiv Goenka Group chairman Sanjiv Goenka and ITC executive director Kurush Grant.
Opposition parties have, however, expressed scepticism about West Bengal gaining anything from her initiative.Sceptical of “her ability to bring in any investment”, opposition parties claimed that the Trinamool Congress government’s policies on land and the fate of Tata Motors’ Singur factory could act as deterrents.BJP secretary Siddharth Nath Singh had questioned the five-day long visit, saying, “She will have a meeting on one day, what will she do on the other four days?”
“She had earlier organised ‘Bengal Leads’, bur what we have seen is ‘Bengal bleeds’. People’s money is being wasted,” Singh had told reporters in Kolkata.
West Bengal Pradesh Congress Committee president Adhir Chowdhury, who too was also critical of the visit, had said, “In a state where the Tata (Motors) left, I doubt whether any foreign investor will set foot there.”Questioning TMC dispensation’s seriousness, CPI(M) leadership had said though the efforts to attract investment was a welcome move, whether the government succeeds was to be seen.