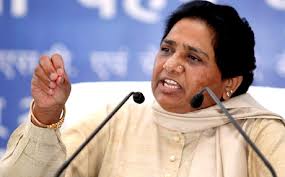 NEW DELHI : Samajwadi Party leader Mulayam Singh Yadav has said he is ready to join hands with arch rival Mayawati, “if Lalu Yadav mediates”. He may have said it as a joke, but Mayawati was serious when she declared, “I will never join hands with Mulayam.”The Bahujan Samaj Party leader asserted today, “Mulayam Singh is hand-in-glove with communal forces. There is no question of an alliance with him.”
The unlikely alliance was proposed by Bihar politician Lalu Prasad Yadav, who shared the stage with old rival Nitish Kumar at a rally this week. “Our alliance has sent a good message to everyone,” Lalu said, referring to Nitish Kumar as his younger brother.”I appeal to Mulayam Singh and Mayawati to enter a maha-alliance too,” he said.
In response, Mulayam Singh said, “Lalu unka (Mayawati) haath pakad le aayen toh hum haat mila lenge (If Lalu brings Mayawati, I will join hands with her).”Mayawati had stronger words for Lalu, as she questioned, “The way Mulayam had me attacked, if it happened to women close to Lalu, would he have joined hands with him?”
Former enemies coming together became the political flavor after Nitish Kumar and Lalu Yadav, both former Chief Ministers of Bihar, vowed to campaign together for upcoming by-polls, to arrest the march of the BJP, which swept the state in the national election. The two leaders are also testing waters for state elections next year.
Mulayam Singh and Mayawati, who have been at daggers drawn for nearly two decades, suffered similar humiliation in the national election, with the BJP bagging 71 of UP’s 80 seats. Mulayam’s party won just five seats and Mayawati none at all.
On their joining forces against the BJP, Nitish Kumar’s colleague and Janata Dal United leader Sharad Yadav said, “I will just say that what happened in Bihar, we initiated it. Whatever happens in future, whether this kind of partnership can be broadened, we will see and let you know.”
Uttar Pradesh votes in 2017 for a new assembly. But the BJP has made it clear that it will work hard in the crucial state to consolidate on its splendid performance of May.