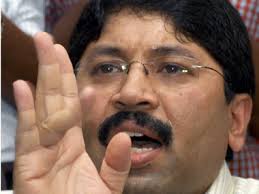 NEW DELHI : Former telecom minister Dayanidhi Maran, his brother Kalanithi and six others, including Malaysian business tycoon T Ananda Krishnan were Wednesday summoned as accused by a special 2G court in connection with Aircel-Maxis deal case.
Special CBI Judge O P Saini took cognisance of the CBI’s charge sheet filed against eight accused including four companies and summoned them on March 2, 2015.
“I have carefully gone through the copy of the FIR, charge sheet, statement of witnesses and related documents comprised in the voluminous record of the case. On the perusal of the record, I am satisfied that there is enough incriminating material on record to proceed against the accused. Accordingly, I take cognisance of the case,” the Special Judge said.
Besides the Maran brothers, CBI has named Malaysian business tycoon T Ananda Krishnan, Malaysian national Augustus Ralph Marshall and four firms — Sun Direct TV Pvt Ltd, Maxis Communication Berhad, Astro All Asia Network PLC and South Asia Entertainment Holding Ltd — as accused.
The CBI has chargesheeted them for the offences punishable under section 120-B (criminal conspiracy) of the IPC and under relevant provisions of the Prevention of Corruption Act.
The court in its two-page order allowed the contention of senior public prosecutor K K Goel that at least four months time may be granted for effecting service of summonses on the accused as five of the eight are residing in different countries like Malaysia, Mauritius and United Kingdom while the remaining three are based in Chennai.
“Accordingly, issue summons to the accused persons for March 2, 2015. In view of the nature of the case, the prosecution is directed to take up the service of process on the accused person in right earnest and to endeavour to ensure that the court process qua each accused is returned to the court at least a week before the date fixed,” the court said.
Earlier, the court had on October 13 reserved its order on the issue of taking cognisance on CBI’s charge sheet filed against Maran brothers and six others.During the arguments earlier, CBI had told the court that cognisance should be taken on the charge sheet as prima facie a case was made out against all the accused.
The agency had argued that the case involves investigation in foreign countries and there were sufficient grounds to proceed against the accused named in the charge sheet.On August 29, the CBI had filed the charge sheet in the case containing the names of 151 CBI witnesses and a set of 655 documents, on which it has relied upon during its probe.
CBI had alleged in the court that Dayanidhi Maran had “pressured” and “forced” Chennai-based telecom promoter C Sivasankaran to sell his stakes in Aircel and two subsidiary firms to Malaysian firm Maxis Group in 2006.