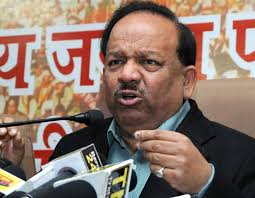 NEW DELHI : Days after the government shunted out an anti-corruption official from the country’s premier All India Institute of Medical Sciences or AIIMs, Union Health Minister Harsh Vardhan today vowed to end corruption in the nation’s central hospitals. He also defended the decision to transfer vigilance officer Sanjiv Chaturvedi, who had unearthed a string of corruption cases at AIIMS.
Mr Chaturvedi was shifted because his posting as the Chief Vigilance Officer was “opposed” by the Central Vigilance Commission or CVC, said the minister. He had earlier claimed that the anti-corruption official’s name had been “rejected” twice by the commission.”The re-profiling of Mr Sanjeev Chaturvedi, the Deputy Secretary posted at AIIMS with the powers of a Chief Vigilance Officer, has generated a storm in some quarters. To the Minister what was moot was the anomaly in the very posting of a CVO without the sanction of the Central Vigilance Commission and preserving the sanctity of the institution,” Mr Vardhan said in a statement.
But there is no record of rejection or opposition by the CVC, sources in the health ministry told today.  Mr Vardhan has himself acknowledged Mr Chaturvedi as the CVO when he acted on a case forwarded to him from the vigilance department in June this year.In his statement, the minister claimed, “There are many aspects to corruption in hospitals which as a medico I know exist”.
“I had stated on my first day in office that I will impose 500 percent transparency and adopt zero tolerance for corruption”, said Mr Vardhan, adding that all systems in India’s central hospitals have been placed under critical review to end “systemic and symptomatic” corruption. The results of his efforts to end corruption, said Mr Vardhan, “would soon be in the public domain”.
Doctors at the premier hospital had yesterday stood up for the anti-corruption official. In a memorandum to the government, they had stated that the officer proved to be “too hot to handle” for the health minister and was thus shown the door. questionable, stated the memorandum.