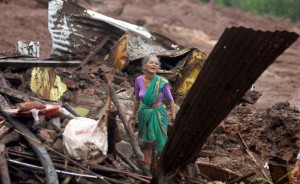 PUNE: At least 41 people have been killed and over 150 are feared buried after a landslide hit a village, nearly 120 kilometres from Pune in Maharashtra. Rescue workers anticipate that the number of dead will rise. Here are the latest developments: The landslide took down a massive section of a hillside and swept away over 40 homes, leaving only mud, slush and debris. “Rescue operations are being hampered due to rain… the PM has announced a compensation of Rs 2 lakh from the Prime Minister’s National Relief Fund,” said Home Minister Rajnath Singh who visited Malin village.
Officials worked through the night using floodlights and earth-moving vehicles to pull people out of the twisted wreckage. “God helps the brave,” an official of the National Disaster Response Force told . earlier in the day, after eight people were pulled out alive from under the debris overnight. Incessant rain and flowing water has hampered rescue efforts. Officials say the entire state machinery has been drafted into the relief efforts. About 250 disaster response personnel are in the area assisting local police, villagers and medical teams.
At least 100 ambulances were also sent to the area which is 15 to 20 kilometres from the nearest medical facility. The police have cordoned off the affected village after people trying to reach the scene of the disaster caused miles-long jams. Only ambulances and other rescue vehicles are allowed beyond the cordon.
Pravin Sadhale of the Maharashtra Emergency Medical Services said rescue equipment was getting stuck in the narrow roads. “The issue is that as we remove the mud, more is flowing in since the rains have been incessant,” he said. Prime Minister Narendra Modi mourned the loss of lives and said all possible efforts must be made to help the victims. Sharad Pawar, whose Nationalist Congress Party is part of the state’s ruling coalition, is also expected to visit the village. The area around the village has been deforested extensively, increasing its vulnerability to landslides. Similar deforestation and environmental damage have caused floods and landslides in other parts of India.