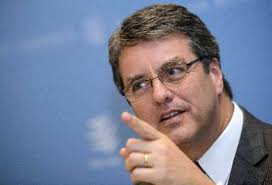 GENEVA (SWITZERLAND) : The World Trade Organization failed on Thursday to reach a deal to standardise customs rules, which would have been the first global trade reform in two decades but was blocked by India’s demands for concessions on agricultural stockpiling.
“We have not been able to find a solution that would allow us to bridge that gap,” WTO Director-General Roberto Azevedo told trade diplomats in Geneva just two hours before the final deadline for a deal.
“Of course it is true that everything remains in play until midnight, but at present there is no workable solution on the table, and I have no indication that one will be forthcoming.”The deadline passed without a breakthrough. WTO ministers had already agreed the global reform of customs procedures known as “trade facilitation” last December, but it needed to be put into the WTO rule book by July 31.
Most diplomats saw that as rubber-stamping a unique success in the WTO’s 19 year history, which according to some estimates would add $1 trillion and 21 million jobs to the world economy, so they were shocked when India unveiled its veto.
Trade experts say Thursday’s failure is likely to end the era of trying to cobble together global trade agreements and to accelerate efforts by smaller groups of like-minded nations to liberalise trade among themselves. India has been vocal in opposing such moves, making its veto even more surprising.
“Today’s developments suggest that there is little hope for truly global trade talks to take place,” said Jake Colvin at the National Foreign Trade Council, a leading U.S. business group.”The vast majority of countries who understand the importance of modernizing trade rules and keeping their promises will have to pick up the pieces and figure out how to move forward.”
Some nations have already discussed a plan to exclude India from the agreement and push ahead regardless, and the International Chamber of Commerce urged officials to “make it happen.””Our message is clear. Get back to the table, save this deal and get the multilateral trade agenda back on the road to completion sooner rather than later,” ICC Secretary General John Danilovich said.
US Secretary of State John Kerry, on a visit to New Delhi, had earlier said he was hopeful that differences between India and much of the rest of the world could be resolved.But after Azevedo’s speech, US Ambassador to the WTO Michael Punke was downbeat.”We’re obviously sad and disappointed that a very small handful of countries were unwilling to keep their commitments from the December conference in Bali, and we agree with the Director-General that that action has put this institution on very uncertain new ground,” Punke told reporters.
India had insisted that, in exchange for signing the trade facilitation agreement, it must see more progress on a parallel pact giving it more freedom to subsidise and stockpile food grains than is allowed by WTO rules. It got support from Cuba, Venezuela and Bolivia.India’s new nationalist government has insisted that a permanent agreement on its subsidised food stockpiling must be in place at the same time as the trade facilitation deal, well ahead of a 2017 target set last December in Bali.
Kerry, whose visit to India was aimed at revitalising bilateral ties but was overshadowed by the standoff, said the United States understood India’s position that it needs to provide food security for its poor but India would lose out if it refused to maintained its veto.