NEW DELHI : As Chief Minister of Delhi, Sheila Dikshit had 31 air-conditioners and 25 heaters in her seven-room official bungalow in the heart of the capital.The government’s response to an RTI or Right to Information query has also revealed that Mrs Dikshit’s home on 3 Motilal Nehru Marg had 15 coolers, 12 geysers and 16 air purifiers.
Ms Dikshit, who was Delhi’s Chief Minister for 15 years, vacated the bungalow after being voted out of power in the December state polls. Former Prime Minister Manmohan Singh has now shifted into it. 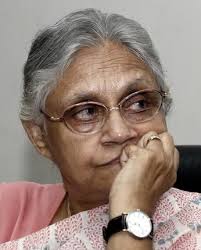 The Central Public Works Department, the civic body in charge of government residences, has said nearly Rs. 17 lakh was spent on the “electrical renovation” of the bungalow according to Mrs Dikshit’s requirements.The 76-year-old former Chief Minister was appointed the Governor of Kerala by the Congress-led government days before the national election, in which the party was routed.
The array of appliances and fixtures removed from the bungalow after Mrs Dikshit shifted to a private 2,000-sq ft, three-bedroom flat on Ferozeshah Road in central Delhi, are now being used in various government departments. “The remaining air conditioners and fixtures shall be utilised as and when the requirement arises,” the civic body said in its reply to RTI activist Subhash Agrawal.
The four-bedroom bungalow, constructed in 1920 as part of the shaded and well-guarded Lutyen’s zone in the heart of Delhi, is spread over 3.5 acres.Before Manmohan Singh moved in, the bungalow was renovated and all the floor, roof and plaster damages were repaired at the cost of Rs. 35 lakh.