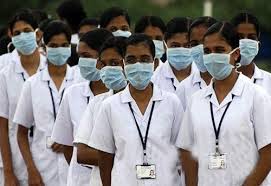 THIRUVANANTHAPURAM/NEW DELHI: The 46 Indian nurses who were forcibly moved by suspected ISIS militants from Tikrit have reached the Iraqi city of Mosul and are unharmed, said a source on Friday.The nurses were taken in buses from Tikrit to Mosul by a team of the Sunni insurgents on Thursday.
The nurses reached Mosul at around midnight India time.“They are safe and have been kept in two rooms which has only one door,” a source close to the nurses told agency.The nurses were provided food and water by their escorts.The militants have now adopted a “tough” attitude towards the nurses, the source added.The Sunni militants were pleasant tempered towards the nurses Thursday but “are now displaying a tough attitude”, the source added.