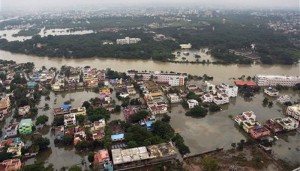 CHENNAI: In a very tragic incident, at least 18 people died due to power failure in one of the hospitals in the flood-hit Chennai city on Friday.
According to initial reports, some patients were brought to the Madras Institute of Orthopaedics and Traumatology (MIOT) Hospital in a critical condition, However, 18 of them could not be saved as power outage led to ventilator failure during their treatment.
Tamil Nadu Health Secretary J Radhakrishnan said, “At least 57 critical patients were shifted to different hospitals, out of them 18 died. Reasons of their death are still unclear and investigations are underway.”
Giving more information, J Radhakrishnan said, “The MIOT Hospital was treating 575 patients when floods started, at that time, at least 75 critical patients were on ventilator.”
Ruling out any lapses from the government’s side, he said, ”While we mourn the loss of lives, I wish to say that not all patients have died due to power and oxygen failure. There has been no lapse from our side.”
All efforts are being taken by the state authorities to provide all possible help to affected people across the state. It is too early to attribute their death to ventilator failure, the Tamil Nadu Health Secretary added.
Radhakrishnan, however, urged media not to spread panic as the situation is already grim in the rain-hit state.   Condoling the tragic loss of lives, Tamil Nadu Home Secretary also said, “We have made all possible arrangements to provide proper health care to people at all the hospitals.”
Media reports claimed that the incident happened as the generator was in the basement of the MIOT hospital which was flooded.