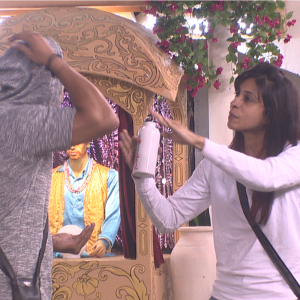 MUMBAI: With the housemates being tested on their ‘pride’ quotient, the war to destroy the opponent’s belongings continues with Mandana and Kanwaljeet being the targets during the task. When Mandana’s prized possessions are taken away and destroyed, Mandana claims that she is emotionally attached to those three items.
She further continues by saying that the items taken away from Kanwaljeet only beget his materialistic attachment and do not stand even ground to her emotions. While housemates claim that Mandana’s selfishness does not allow her to see other’s emotions, Kanwaljeet keeps up his stance by saying that he does not care about anything else but his spondylitis pillow.
Mandana gathers up her team members Keith, Rochelle and Prince in the bedroom and tells them that she does not wish to give up on the task because her favorite belongings have been taken away and destroyed.
Rochelle and Keith oppose her opinion and ask her if she will not feel guilty about destroying anyone else’s belongings. They also request Kanwaljeet to give up when Priya overhears this and forbids them from convincing Kanwaljeet to give up. After this, Kanwaljeet’s team takes away Mandana’s Versace shoes and destroys them as well.
Later, when Rochelle requests someone to stop this task because it has reached beyond everyone’s tolerance level, Mandana claims that they will always have a problem with her because when she gives up during a task, they want her to continue and when she diligently does her task, she is asked to give up! Rochelle says that they are only fighting for her belongings and do not wish to see them destroyed.
Realizing that the house has been immersed in chaos, Priya puts order to the task and says that as the supervisor of the task, she has come to a conclusion.
She says that if a team wants to give up on a task, she will take that as the final verdict. Rochelle, Keith and Prince who are convinced that they wish to discontinue the task immediately raise the white flag, much to Mandana’s dismay.
Later, Rishabh feels bad for Mandana and hugs her, emoting how much he empathizes with her situation. Meanwhile, in the garden area, Prince and Kishwer get into a heated argument when Kishwer blames Prince for destroying Kanwaljeet’s spondylitis pillow and says that they should have thought before taking away Kanwaljeet’s medical conditions.
In his defense, Prince says that they did not intend to make him suffer. Prince further retorts by saying that according to his logic, Bigg Boss would have most definitely returned the spondylitis pillow to him after the task and that’s why they decided to destroy it.

After lights out, Mandana is still seething with rage and talking to Rishabh about how Keith and Rochelle always try and maintain their image. Rishabh tells her firmly that it was her attitude that went against her. Overhearing the conversation, Keith tells Mandana that he does not play upon his image and that the task was primarily about taking it to a level where everyone’s tolerance level will be put to test.
Meanwhile, Rishabh and Price go through a lust test in the show where the two will be seduced by a sexy girl and they have to control their hormones. The one that gives up first will lose the task. let’s see who tries to control their hormonal emotions, Rishabh or Prince?