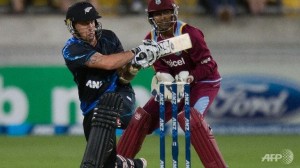 WILLINGTON : Wicketkeeper Luke Ronchi made an unbeaten 51 as New Zealand beat West Indies by four wickets in the second Twenty20 cricket international on Wednesday to take the two-match series 2-0.
Ronchi surpassed his unbeaten 48 in the first match at Auckland, which New Zealand won by 81 runs, reaching his first half century in T20s from 25 balls with four fours and two sixes.
The match concluded New Zealand’s domestic series against West Indies in which it won the three-test series 2-0, shared the five-match one-day series 2-2 and won an important victory in the Twenty20 series six weeks from the World Twenty20 in Bangladesh.
In a good match for wicketkeepers, Denesh Ramdin top-scored for West Indies with 55 in its total of 159-5 while New Zealand reached 163-6 with an over to spare.Ramdin reached his half century from 26 balls and took his 55 runs from 31 balls with three fours and three sixes to spur West Indies to a competitive total after it won the toss and batted.
The visitors were struggling at 66-3 after 10 overs but Andre Fletcher began their recovery, making 40 from 36 balls and sharing a 70-run fifth-wicket partnership with Ramdin which ended when he sacrificed his wicket in a run out mix-up.
Young speedster Adam Milne took 2-22 from his four overs as the best of the New Zealand bowlers. Jesse Ryder gave New Zealand a brisk beginning, clubbing 23 from 13 balls with two fours and two sixes but the home team lost wickets regularly and found itself 78-4 at the midpoint of its innings.
Ronchi and Ross Taylor (39) put on 68 for the sixth wicket, turning the match New Zealand’s way, and former Australia wicketkeeper Ronchi stayed on to see New Zealand home. He was helped by young allrounder Jimmy Neesham, who hit an unbeaten 14 from six balls, including a pull for four to bring up the winning runs.
Ronchi said after a mediocre start to his limited overs career for New Zealand he was glad to contribute to its last two Twenty20 victories.
”I think it was just a massive thing to make runs and contribute the other day and I continued on from there,” he said. ”It just felt really good today.”I got myself in with Ross (Taylor) and just tried to make the best of an opportunity.
”We still had a lot of time to bat so we thought we could still catch up on the balls we miss out on. We just said if the singles are there they’re there, if it’s a boundary option then go for it.”New Zealand’s run chase was nervous at times. It still needed 30 from the last 24 balls and 13 off the last 10 but Neesham took the initiative and steered New Zealand home with some hard hitting.
Ronchi had previously changed the momentum of the innings when, with New Zealand struggling at 106-5 after 14 overs, he hit a six and a four from consecutive balls from West Indies captain Dwayne Bravo.That altered the run-rate required in New Zealand’s favor and they were able to get home comfortably.
Bravo was still pleased with the performance of his team.”It was a big improvement from the last game,” he said. ”Unfortunately we didn’t win this one but it was a good learning process and I was happy with the effort from the guys.
”I think we were 15 to 20 runs short but at the same time the bowlers gave it their best. Ronchi and Taylor held the New Zealand innings together in the middle but overall I’m happy.”