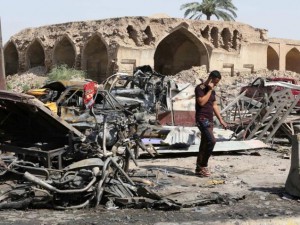 BAGHDAD: An attack by the Islamic State group on a crowded marketplace in Iraq’s eastern Diyala province has killed 115 people, including women and children, in one of the deadliest single attacks in the country in the past decade.
The mostly-Shia victims were gathered to mark the end of the Islamic holy month of Ramadan, which ended on Friday for Iraqi Shias and a day earlier for Iraqi Sunni Muslims.
Police said a small truck detonated in a crowded marketplace in the town of Khan Beni Saad on Friday night in what quickly turned celebrations into a scene of horror, with body parts scattered across the market. At least 170 people were injured in the attack, police officials said, speaking anonymously because they are not authorised to brief the media.
Men quickly emptied boxes of tomatoes to use them for carrying the bodies of small children, witnesses said, while adult victims lay scattered around the attack scene waiting for medical assistance.

“Khan Bani Saad has become a disaster area because of this huge explosion,” Diyala resident Sayif Ali said. “This is the first day of Eid, hundreds of people got killed, many injured, and we are still searching for more bodies.”
The Islamic State group claimed responsibility for the attack in a statement posted on Twitter accounts associated with the militant group.
Iraq’s speaker of parliament, Salim al-Jabouri, said Saturday that the attack has struck an “ugly sectarian chord,” and added that government is making “attempts to regulate Daesh’s terror from destabilising Diyala security,” referring to the militant group by its Arabic acronym.
But anger is rife in the volatile province, where a number of towns were captured by the Islamic State group last year. Iraqi forces and Kurdish fighters have since retaken those areas, but clashes between the militants and security forces continue.
“We went out to the market for shopping and preparations for the holiday Eid in order to receive holiday cheer,” said another resident, who spoke anonymously for fear of retribution. “But this joy has turned to grief and we have lost family, friends and relatives, all because of this government’s failure to provide us with security.”

Security forces were out in full force across Diyala on Saturday, with dozens of new checkpoints and security protocols immediately implemented in the wake of yesterday’s attack.“This horrible carnage is truly outside all boundaries of civilised behaviour,” Jan Kubis, the special representative of the United Nations mission in Iraq, said today.”
The Sunni militant group has been behind several similar large-scale attacks on civilians or military checkpoints as it seeks to expand its territory. The group currently controls about a third of Iraq and Syria in a self-declared caliphate.
In August last year, at least 64 people were killed in an attack on a Sunni mosque in Diyala in what locals believed was a retaliatory attack against Diyala tribes that refused to proclaim loyalty to the Islamic State group.