NEW DELHI: India and Pakistan marked a tense Eid-ul-Fitr at the LoC and a 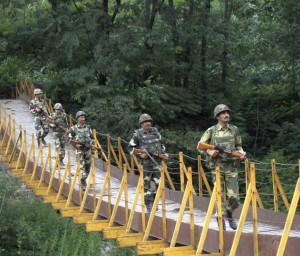 t the major border crossing point, as border officials said Pakistani rangers and the BSF exchanged fire overnight. According to officials, firing from the Pakistani side began “late at night” on Friday in the Nowshera sector, in Rajouri district, and that the BSF retaliated fire.
However there were no injuries reported on either side. Meanwhile, for the second time in a year, Indian and Pakistani troops didn’t exchange Eid sweets at the border crossing point of Wagah-Attari.

According to the Deputy Inspector General BSF MF Farooqui, the BSF had, according to practice sent a message asking the Pakistani rangers stationed at the crossing about when they could exchange sweets, but received no response. “We give sweets on Eid every time. The Rangers have not accepted it today,” he said.

In Delhi, Pakistan High Commissioner Abdul Basit didn’t refer to the tensions or the sweets exchange, but said political will was required to improve ties. Speaking to reporters after attending Eid prayers in Delhi’s Chandni Chowk area he said, “We hope relations between the two countries will improve and if both sides have the will, then there is no reason our issues such as poverty, illiteracy and disease cannot be resolved.”
Sweets are exchanged on most festivals and occasions like Republic Day, Pakistan Day (March 23rd) and Independence day between soldiers posted at the border crossing in Punjab. However, while those occasions were marked in the past year, sweets weren’t exchange on Eid-ul-Zuha in October 2014, because of similar hostilities over cross-LoC firing. On some smaller border checkposts, at a few locations in Punjab Rajasthan, and Gujarat officials said sweets were exchanged.
At the Jammu border crossing, a senior commander told agency PTI that sweets were not offered by BSF rangers “as a mark of protest” over the death of a BSF jawan and others injured in firing over the past weeks. The Eid frost comes as a stark contrast to the situation just one month ago, when a delegation of Pakistani rangers had exchanged sweets at the Jammu border crossing for the ‘Chambaliyal fair festival’.
On Saturday, many villages along the LoC seemed deserted, according to agency reports, after two weeks of firing between soldiers.