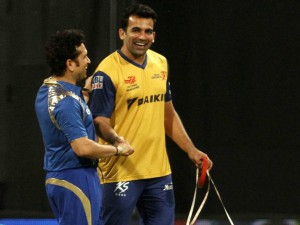 NEW DELHI: Out-of-favour India fast bowler Zaheer Khan announced his retirement from international cricket on Thursday. Zaheer played a key role in helping India lift the 2011 World Cup. He was the joint-highest wicket-taker (21) with Pakistan’s Shahid Afridi in the showpiece event held in the sub-continent.
“As I was training for the upcoming season, it dawned on me that my shoulder may not last the rigours of bowling nearly 18 overs a day, and that’s when I knew it was time. With immediate effect I bid adieu to my career in international cricket. I look forward to signing off my last season in domestic cricket at the conclusion of the Indian Premier League season 9,” Zaheer said.
The left-arm fast bowler, who was part of India’s 2011 World Cup Winning Squad, said the decision was not easy. “The toughest call in a cricketing career is when one has to walk away from the game itself. You almost will yourself and want to push that few, extra miles but then the body, after nearly two decades, decides not to respond. However, my greatest cricketing moment was lifting the World Cup as part of Team India and creating history. We played as a top team and being part of the journey of India as a top ODI side was very fulfilling.”
Sachin Tendulkar, Mahendra Singh Dhoni Laud Zaheer KhanReacting on Zaheer’s retirement, Sachin Tendulkar tweeted about his achievement and said he had the ability to ‘out-think’ the batsman. “One of the coolest pace bowlers I know.
I am sure he will do well as he begins a new chapter in his life,” he tweeted. MS Dhoni also tweeted his praise on Zaheer and said that most of Team India’s achievements would have been difficult to achieve without his help. (Zaheer Khan a ‘Thinking’ Bowler, Say Sachin Tendulkar and MS Dhoni)
Zaheer, who made his Test debut against Bangladesh in 2000, picked up 311 wickets in 92 matches at 32.94 in the longest format of the game. The 37-year-old left-arm pacer was capped 200 times in ODIs and 17 times T20Is, pocketing 282 and 17 wickets, respectively. He is the fourth-highest wicket-taker in longer version among Indians after Anil Kumble (619), Kapil Dev (434) and Harbhajan Singh (417).
Zaheer last played a Test for India in February 2014 against New Zealand in Wellington. Since then, he has been plagued by fitness issues and he missed the 2014/15 Ranji Trophy for Mumbai due to a shoulder injury.
He was picked by the Delhi Daredevils in the 2015 IPL and he bagged seven wickets in seven games. Zaheer will continue to play domestic cricket till the end of IPL 2016. Zaheer Khan has business interests in the food and hotel industry.
The international career of Zaheer Khan and Yuvraj Singh flowered under the captaincy of Sourav Ganguly. But in recent times, both players have been overtaken by younger and fitter players. The national selectors found little value in Zaheer keeping India’s future in mind. (Also Read: Lifting the World Cup Was Greatest Moment, Says Zaheer)
resident of the BCCI, Shashank Manohar complimented Zaheer on his wonderful career and said: “The BCCI appreciates Zaheer Khan’s outstanding service to Indian Cricket. He served Indian cricket with remarkable passion and commitment. Being a fast bowler in the Indian sub-continent is challenging but he led the bowling attack with distinction and contributed significantly to the success of Indian cricket. I wish him all the best for the future.”

Honorary Secretary of the BCCI, Anurag Thakur said: “Zaheer will go down as one of the finest fast bowlers in the history of Indian cricket.
He has been the leader of Indian fast bowlers in the last decade or so and of the best exponent of reverse swing in the country. He has been an outstanding role model on and off the field for Indian cricket. Zaheer has been of the key reasons for India’s success over the last fifteen years. I congratulate him on his wonderful career.”