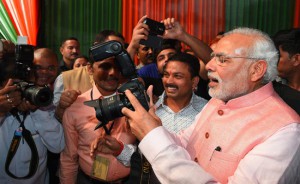 NEW DELHI : Prime Minister Narendra Modi today surprised journalists when he decided to wield the camera at the BJP headquarters for a ‘Deepawali Milan’ an interaction exclusively with members of the media.
It was attended by BJP President Amit Shah, senior Cabinet ministers and party leaders. Right after addressing journalists, the prime minister walked down the stage and waded into the group of waiting journalists.
As media czars, top editors and reporters from print and television channels lined up, PM Modi greeted each one of them. Related PM Narendra Modi Clicks Picture of BJP Photographer PM Narendra Modi Praises Media, Says ‘You Have Turned Your Pen Into a Broom’ In Major Media Outreach, PM Narendra Modi Meets Journalists As he walked deeper into the media enclosure a few enterprising ones whipped out their smartphones and triggered a series of “selfies” taken by journalists with the prime minister in the frame.
He didn’t disappoint anyone – as he patiently waited for each one of them to get the best shot. Catching every move of the PM was BJP’s official cameraman – Ajay Kumar Singh. Despite the jostling Mr Singh kept the PM in the frame. Suddenly, Mr Modi sprang another surprise, as he said something to the cameraman and seconds later the latter could be seen handing over his camera. The PM deftly wielded the camera and clicked a picture before handing it back.
“This was a big Deepwali surprise for me… he took a very nice picture of me… I’ll frame it and put it up in my house,” a beaming Ajay Kumar Singh told NDTV. The Prime Minister later posed for a picture with him. Before leaving, the PM did not forget the large number of cameramen lined outside the venue. He walked up to each one of them and shook hands.