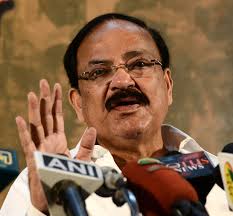 NEW DELHI : Dismissing reports that BJP prime ministerial candidate Narendra Modi was overshadowing the party, senior party leader Venkaiah Naidu cited the example of how former Prime Minister Atal Behari Vajpayee wanted Modi to resign as Gujarat Chief Minister after the 2002 riots, but he had to give in to the party’s “collective decision” against the move. This is evidence that no individual leader is above the party, said Naidu, who was the BJP president at the time of the Gujarat riots.
“No BJP leader is afraid of Modi… He is one of our colleagues and the darling of the masses today. In the BJP, the president presides, team decides,” said Naidu, speaking at The Indian Express Idea Exchange programme on Friday.
“Even during Vajpayee’s regime, decisions were taken collectively… Atalji opined that the Gujarat Chief Minister (Modi) should adhere to raj dharma and step down (over the 2002 riots). But the party collectively decided that he should continue, and that decision prevailed. I was the party president, it was a difficult moment for me, but Atalji went along with that (the party’s decision). That is how the the BJP functions,” said Naidu.
“I recorded this only to show that the party functions collectively… which is why Modi continued and he won an election… Vajpayeeji campaigned for him also,” he said
“There is a clear distinction between the functioning of the BJP and other parties. So, don’t worry, no BJP leader is afraid. We are all proud that one of our colleagues has become the darling of the masses and he is going to become the Prime Minister of the country. Nobody is afraid of him,” said Naidu.
The former BJP president, who hails from Seemandhra region of Andhra Pradesh, also accused Lok Sabha Speaker Meira Kumar of being “partisan” and facilitating the introduction of the Telangana Bill in the House.
“The Speaker is wrong. I am saying this on record… she is partisan, she is wrong. I am ready for any debate on this issue,” he said, questioning Kumar’s ruling that the Telangana Bill was introduced while the Opposition parties claimed that it wasn’t. “They have played a very dirty game… Sushmaji (Swaraj) was not aware that the live telecast had been stopped. They claimed a technical problem. Technical or tactical. I said it is neither technical or tactical, it is practical. They planned it, and then did it,” he said.