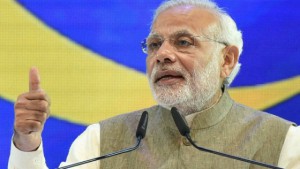 BRUSSELS:  Prime Minister Narendra Modi has called for effective response from world bodies like United Nations against terrorism. Addressing a huge gathering of Indian Diaspora in Brussels last night, he said, failure do so so will render the UN irrelevant.
Mr Modi said, the United Nations should immediately define terrorism so that policies can be devised to tackle it effectively. Mr. Modi said, the world organisations are yet to brace-up themselves to counter the menace of terrorism which has acquired a new dimension.
Terming terrorism as a threat to entire humanity, Mr. Modi 90 countries suffered from this menace last year. The Prime Minister opposed the idea linking terrorism with any religion.

Highlighting his government’s achievements, Mr Modi said, India is emerging as the fastest growing economy in the world. He said, the country has achieved the highest ever production of milk, electricity, coal, urea and ethanol in 2015. Mr. Modi said, Indian Railway made largest ever investment to upgrade and modernise its infrastructure and other facilities.
The Prime Minister said the country has achieved record software export during 2015.
He said, his government will provide five crore LPG connections to the BPL families in the next three years. Mr. Modi said his government has taken a number of steps for the ease of doing business.