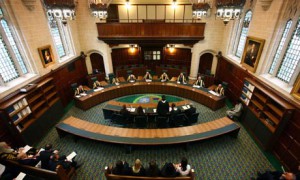 LONDON: In a setback to Pakistan, a UK court has directed it to pay 150,000 pounds to India as legal fees in the 67-year-old Hyderabad Funds case involving the Nizam’s money while terming Pakistan’s behaviour as “unreasonable”.
Holding that Pakistan has no “sovereign immunity” in the case, the Judge ordered the Pakistan High Commissioner here to pay the legal costs incurred by the other respondents in the case relating to the ‘Hyderabad Funds’ which is currently valued at 35 million pounds.
It is understood that the legal costs of the respondents – Govt of India, the National Westminster Bank & the Nizam’s heirs Mukkaram Jah & Muffakham Jah – are approx 400,000 pounds. Of this India has been paid 150,000 pounds, the National Westminster Bank 132,000 pounds and the Nizam’s heirs about 60,000 pounds each respectively.
The immunity waiver under the verdict, which has opened the doors for India to recover the frozen funds through legal process, is irrevocable.
It is also reliably understood that the Indian government and the heirs of Nizam were holding consultations on the subject.This case, known as the ‘Hyderabad Funds Case’, relates to transfer of 1,007,940 pounds and 9 Shillings to a London bank account in the name of the High Commissioner in the UK for the then newly formed state of Pakistan, Habib Ibrahim Rahimtoola, at the Westminster Bank (now Natwest) in 1948.
The money was transferred by an agent who appeared to be acting on behalf of the absolute ruler of one of the largest and richest of the Indian princely states, the seventh Nizam of Hyderabad.
Following the partition in 1947, and the formation of the independent sovereign states of India and Pakistan, the numerous princely states within the sub-continent were permitted by the UK to elect to join either of the two new states, or to remain independent.The Nizam chose to remain independent.
However, on September 18, 1948, Hyderabad was annexed to India. On September 20, 1948 the money was transferred to Rahimtoola by the agent. On September 27, 1948 the Nizam sought to reverse the transfer of money claiming that it had been made without his authority.
The Bank was unwilling to comply with the Nizam’s request without the agreement of the account holder. Such consent was not forthcoming, and for a number of years matters remained unresolved.
As the successor state to the Nizam’s State of Hyderabad, India has all along sought its claim over the money maintaining that it was State monies and not Nizam’s private monies.
However, stuck in a legal battle with no hope of a resolution since 1960, the Indian cabinet had approved efforts to pursue an out-of-court settlement with Pakistan and Nizam’s heirs to recover the funds. The Cabinet had also given its approval to the negotiating strategy in the matter.
With no State immunity for Pakistan over the funds, India has once again got the chance to get the money through the legal process.