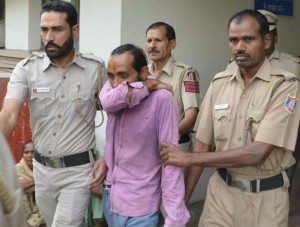 NEW DELHI: A Delhi court has held Uber cab driver Shiv Kumar Yadav guilty of raping a woman executive last year.Additional Sessions Judge Kaveri Baweja on Tuesday convicted him and fixed October 23 as the date for arguments on the quantum of sentence to be awarded to him.
According to the police, the woman was raped by 32-year-old Yadav on the night of December 5, 2014, in his cab, which she had hired to return home in Inderlok in North Delhi. The accused had assaulted the woman at an isolated place.
A statement released by Uber India said the company was “pleased he has now been brought to justice.””Safety is a priority for Uber and we’ve made many improvements — in terms of new technology, enhanced background checks and better 24/7 customer support — as a result of the lessons we learned from this awful case,” Amit Jain, president, Uber India, said in the statement.
The trial in the case began on January 15. All the 28 prosecution witnesses supported the case in their evidence while counsel of the accused, Shiv Kumar Yadav, argued that he had been implicated in the case. The victim also identified the accused.
The victim had identified Yadav for the first time in the Tis Hazari courts premises when she had gone there to record her statement and the second time in the trial of the case.
Yadav was convicted for charges of rape, causing grievous bodily harm and endangering the life of a woman, kidnapping a woman, criminal intimidation and voluntarily causing hurt under the relevant Sections of the Indian Penal Code.