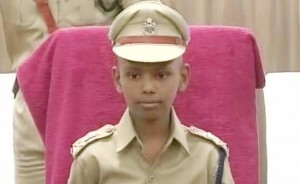 HYDERABAD: Ten-year-old Sadiq, who has blood cancer, wanted to be police commissioner, and his wish was granted on Wednesday.Dressed in khadi uniform and a cap, he beamed with pride when police officers of Hyderabad saluted him, their “chief” for a day. He also had a snappy salute for the cameras, baton tucked under one arm.
Sadiq, who is from Karimnagar, has many relatives in the police force. So it was no surprise when he told “Make a Wish Foundation” – a voluntary organization that works for children with life-threatening diseases – that he wanted to be police commissioner.”I want to maintain peace and catch rowdies,” he told a crowd of reporters, dwarfed by his seat.
Hyderabad police chief Mahendar Reddy sportingly gave up his office for the role-play, saying he felt happy to fulfill little Sadiq’s wish.In August, Telangana Chief Minister K. Chandrasekhara Rao visited hospital for a boy who expressed the wish to meet him.The organization has appealed to popular Southern actor Pawan Kalyan to grant the wish of a girl in the Khammam district of Telangana, who is suffering from brain tumour.