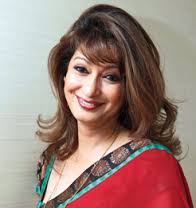 NEW DELHI : The injury marks found on the neck, wrists and arms of Sunanda Pushkar during the post-mortem have opened up various points of investigation, including whether she was involved in a scuffle.
Sunanda Pushkar was discovered dead in room number 345 of Hotel Leela Palace, in Delhi’s Chanakyapuri, by her husband Shashi Tharoor, a junior minister in the Congress-led UPA government.
Exclusive information with media is that Sunanda came alone to the hotel on 16th without any booking and was crying.
An AIIMS staffer present during the autopsy told media that Sunanda’s body had injury marks. After the autopsy, a team of three senior doctors at AIIMS on Saturday termed Sunanda’s, 52, death as ‘sudden and unnatural’.
Doctors, however, were tight-lipped on the nature of injury and whether they could be related to the cause of the death. They also didn’t disclose positions of the injury marks.
Despite doctors not being sure of the real cause of Sunanda Pushkar’s death, “there is a possibility that she died of an overdose of anti-depression medicine,” according to a senior police official.
For now, doctors have ruled out the possibility of Sunanda being poisoned. The exact cause of her death will be revealed only after getting reports of toxicology and pathology from the respective laboratories.
“We are focusing on investigating it on medical angles as this seems like a case of sudden and unnatural death. As of now, we can’t reach any conclusion but we have taken some sample for toxicological and pathological analysis. The real cause will become clear after that,” said Dr Sudhir Kumar Gupta, head of the Forensic Science Department, AIIMS, who was accompanied by two other senior doctors.
The autopsy ended around 2:25 pm on Saturday. Sunanda’s body was brought to AIIMS for post-mortem around 3:30 am on Saturday morning, after it was discovered in her hotel room at 8.30 pm the previous night.
Tharoor claimed her body and left for his official residence at Lodhi Estate around 3:30 p.m. The funeral was held at the Lodhi crematorium. Late in the evening, Sonia Gandhi visited his residence to express her condolences.
Tharoor and his aide Abhinav Kumar were questioned by the police on Friday night, along with the hotel staff, including those who had gone to her suite. The police also checked the CCTV footage of the lobby, where she was last seen around 3:30 pm.
The case has been handed over to a magistrate as the couple’s marriage was yet to complete seven years. Any death within seven years of marriage has to be investigated by a magistrate. “The case has been handed over to magistrate and the police will act as per his directions,” said Deepak Mishra, Special Commissioner, Law and Order, Delhi Police.Exclusive information with media is that Sunanda came alone to the hotel on 16th without any booking and was crying. She was comforted by Hotel Leela staff and given suit no 345. Tharoor arrived later and was given another suite. Sunanda did not come out of her room throughout the day or even for breakfast, which is complimentary.
She ordered only khichdi the whole day. On 17th, she ordered only pineapple juice and coconut water. Sunanda, an entrepreneur, had married Tharoor in 2010, but for the past few months, their married life had hit a trough. Sunanda had accused Mehr Tarar, a Pakistani journalist of
stalking her husband and also expressed her interest to get divorce from Tharoor. Meanwhile, Tharoor was admitted to AIIMS around midnight on Friday for a minor pain in the chest. ECG and other tests, however, proved normal and he was discharged around noon on Saturday.
There are 12 CCTV cameras on each floor of the newly built hotel — one of the most costliest piece of real estate, which Leela had successfully bid for Rs 700 crore in 2007. The suite Sunanda and Tharoor stayed costs Rs 17,500 per night.
The last days
Jan 15: Sunanda comes to Hotel Leela crying with no booking.Staff comfort her and take her to Suite 345. She remains locked inside
Jan 16: Sunanda orders khichri  through the day. Tharoor visits her, takes another suite
Jan 17: Sunanda orders just coconut water and pineapple juice throughout the day
Shashi panics after calls went unanswered. Room opened in his presence