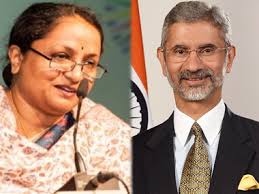 NEW DELHI : The sacking of Sujatha Singh, the highest ranking diplomat, has become a massive controversy for the government, which on Wednesday announced the “curtailment” of her tenure as Foreign Secretary, just after US President Barack Obama’s visit.
Subrahmanyam Jaishankar, former envoy to the US, took over today as the new Foreign Secretary.
Ms Singh, 60, is the first foreign secretary to be removed since 1987, when AP Venkateswaran was removed by then prime minister Rajiv Gandhi.
“Why have you replaced the head of the foreign service so unceremoniously? The government needs to explain,” said Congress leader Manish Tewari.Sources in the government say Sujatha Singh had refused to take several options for an “honourable exit” offered by the government.
Prime Minister Narendra Modi was reportedly keen on replacing Sujatha Singh, who was appointed by the previous Congress government. Mr Jaishankar’s appointment is seen to underscore the prime minister’s control over foreign affairs, a department that has seen most activity since he took power in May last year.
During Sujatha Singh’s tenure, India and the US were involved in a massive diplomatic row over the arrest of Indian diplomat Devyani Khobragade in New York for an alleged visa fraud. Ties hit their lowest level in a decade.
Sources close to Sujatha Singh say she is “livid” at being replaced. Ms Singh has been silent on her sudden removal. Source close to her said “being media savvy is no indicator of competence.”
They say she was responsible for managing the diplomatic side of PM Modi’s swearing in ceremony in May last, and getting leaders from neighbouring countries to attend the event at short notice.
“She ensured that every country got their share of attention in the swearing in ceremony and the event was not hijacked by the India-Pakistan dynamics,” said a source close to Sujatha Singh.