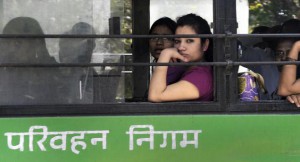 NEW DELHI: The Delhi Government is understood to be in the process of creating a joint task force aimed at making female commuters more comfortable on public transport – especially after dark.
According to a senior Government official, the said security contingent would consist of personnel both from the respective Delhi units of the Home Guards and Civil Defence. Representatives of the latter approached Chief Minister Arvind Kejriwal volunteering for the job on Thursday.
“Civil Defence volunteers expressed their willingness to be deployed on public transport, especially Delhi Transport Corporation (DTC) buses, for the safety and security of female passengers commuting after dark,” said the official.
“Mr. Kejriwal has asked them to prepare a proposal for the same detailing the manpower resources available to them and the number of volunteers they would be able to provide for the purpose,” the official said adding that the Civil Defence would make a detailed presentation on the said proposal at the earliest.
The Government has already directed the Revenue Department, which is in-charge of the Delhi Home Guard, to submit a similar proposal and prepare a detailed presentation to deliver on its promise of making public transport safer for female commuters.
Apart from volunteering, the Delhi Civil Defence (DCD) representatives are also understood to have requested the Chief Minister to cancel a notification issued by the previous Sheila Dikshit-led Congress Government bringing them under the Revenue Department.
The DCD, which is currently entrusted with the responsibility of providing self-defence training to school and college students in addition to traffic management at selected spots, has a force of around 17,000 volunteers.
Meanwhile, a similar presentation which the Delhi Police were supposed to make on bringing down the crime rate and making the Capital safer for women got postponed due to the volume of meetings scheduled for Mr. Kejriwal on Thursday.
A source said as many as 21 Departments were scheduled to make presentations to Mr. Kejriwal through the day; beginning at 12 am, the last of these got over around 7:30 pm. “Many departments” were unable to squeeze themselves through his schedule and must try their luck on Friday.