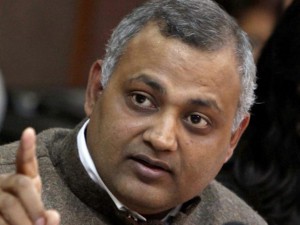 NEW DELHI: Former Delhi Law Minister and Malviya Nagar MLA Somnath Bharti on Wednesday surrendered at a police station to join investigation in a case of alleged domestic abuse filed against him.
Mr. Bharti, who had approached the High Court for anticipatory bail on Tuesday, surrendered just hours after being provided reprieve till September 17.
Following a late night brainstorming session on the issue with party members, Mr. Bharti is understood to have been asked to join the investigation.
Three AAP MLAs — another former Law Minister Jitendra Singh Tomar, Manoj Kumar and Surinder Singh — have faced arrest by the Delhi Police. If taken into custody, Mr. Bharti will be the fourth AAP MLA to be arrested in the last four months.