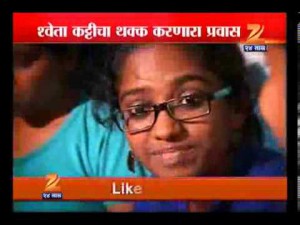 Shweta Katti is an amazing story. This is the stuff movies are made of. Pain and abuse have been part of her life as long as she can remember before she emerged triumphant. Shweta was born in Kamathipura, a red-light area of Mumbai, but she has fought the social stigma to not just bag a US scholarship, but also win the 2014 UN Youth Courage Award.
For the first 17 years of her life, Shweta lived above a brothel, and suffered an alcoholic and abusive stepfather. “My mother was my only hope,” she said. Things changed when Kranti, an NGO that works with children in red-light areas, came into her life. She was given psychological coaching, she responded very well. She started studying.
After her class 12 exams, Shweta travelled to Nepal and the tribal areas of Jharkhand for a year, giving motivational talks to sex workers and their children. She also spoke at eight women’s conferences during this time. Newsweek recently featured Shweta in its list of “25 under-25 Young Women to watch”
Growing up was not easy
She says: My stepfather sexually abused me when I was young. He would say things like, “Your heart is as dark as your skin color.” In school my classmates used to call me cow dung. My relatives used to say, “nobody will marry you because you are dark, and nobody wants a dark and ugly girl.”
After getting her degree, she wants to open a free therapy center in the red-light area
She says: I have this feeling that I can’t stay out of that area. I can’t just leave because I have seen bad things. If I want to change it then I will have to stay there and I will have to face whatever happened to me. I want to open a free therapy center in the red-light area because there is no mental health care in that area; nobody cares. But they are the ones who need it the most.
She urges you to become a part of her journey
Shweta, and Kavita, a friend of hers from the same red-light area now have a chance to take up a Semester at Sea, a university on a ship that travels 12 countries in 5 months.
She says: And we are two little girls, best friends, from Kamathipura – girls who were always told we would never amount to anything and never leave the red-light area. We still dream of studying and living together. And we have an opportunity to sail the whole world – we just need a little financial help to get there. Will you help us fulfill our childhood dreams?