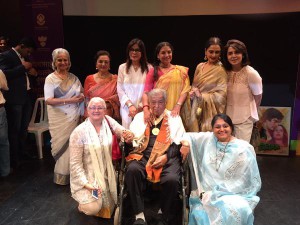 MUMBAI: Of the series of photo-ops that actor Shashi Kapoor’s award ceremony at Mumbai’s Prithvi Theatre afforded on Sunday, there was none more special than this one – the 77-year-old with eight of his former heroines.
The photo, taken after Mr Kapoor received his Dadasaheb Phalke Award from Information and Broadcasting Minister Arun Jaitley, is being widely shared on social media. Actor Rishi Kapoor, Mr Kapoor’s nephew, posted the picture on Twitter, describing it as ‘WOW.’ His tweet has been favourited over 2,000 times and has over a 1,000 retweets.
In the photo, Mr Kapoor poses with Waheeda Rehman, his co-star in Kabhi Kabhie, Trishul and Namak Halaal; Asha Parekh, his heroine in Pyar Ka Mausam; Zeenat Aman, with whom he appeared in Raj Kapoor’s controversial film Satyam Shivam Sundaram; Shabana Azmi, co-star in several films including Junoon and Fakira; Rekha, who also appeared with him in multiple films like Baseraa and Utsav; Neetu Singh, who was heroine in Deewar and is married to Rishi Kapoor; Nafisa Ali, who made her debut in Junoon opposite Mr Kapoor; and Supriya Pathak, co-star in Kalyug and Vijeta.
Hema Malini, who featured opposite Shashi Kapoor in Do Aur Do Paanch and Trishul, was also at the ceremony but not in the photo.Shashi Kapoor, star of films like Deewar, Sharmilee, Junoon and Merchant-Ivory productions such as In Custody and Heat and Dust, is the third of his family to receive the Dadasaheb Phalke Award, India’s highest honour for cinema.
He was presented with a ceremonial shawl and certificate by Arun Jaitley at Prithvi Theatre, which Mr Kapoor established with late wife Jennifer Kendal. Amitabh Bachchan, who made 12 films with Shashi Kapoor including the seminal Deewar, spoke at the ceremony, as did Rishi and Ranbir Kapoor.
Most of the Kapoor family were at the ceremony, including Shashi Kapoor’s sisters-in-law Krishna Raj Kapoor and Neela Devi, who rarely make public appearances.