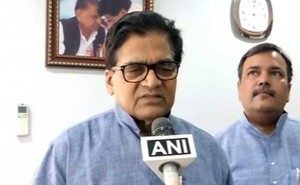 NEW DELHI: The much talked about Janata Parivar merger will not take place before the Bihar elections which are scheduled for later this year, Samajwadi Party’s Ram Gopal Yadav said today. The senior Samajwadi Party leader said there are technical problems with having a united party symbol which needs to be resolved by the Election Commission first.
“There is a technical problem. The problem is that if a political party tells the Election Commission that they are going to merge and form a new party, then the original name and symbols of the party will be frozen. The Bihar elections are near and the merger cannot be done in a hurry,” Mr Yadav told in New Delhi.
“Voters will be confused, especially in Bihar. So the better option at this point of time is that both the parties come together, they share the seats and fight the election jointly. We will be signing the death warrant of our party if we do the merger in a hurry,” he added.

Sharad Yadav, whose party the Janata Dal (United) or JD(U) is a part of the merger, refused to comment. “We have made Mulayam Singh ji as the leader and he should be the one who will speak on it. A seven men committee is made and they are under him. I would not like to comment on it,” he said.
Last month, six parties with socialist roots had announced that they were merging to form a national party headed by Samajwadi Party chief Mulayam Singh Yadav. They were all once part of the Janata Dal, which disintegrated almost two decades ago.
The six parties are – the Samajwadi Party, the JD(U), Rashtriya Janata Dal, Janata Dal (Secular), the Indian National Lok Dal and the Samajwadi Janata Party.
The first big test for the Janata Parivar will be the Bihar elections, where JD(U)’s Nitish Kumar and RJD’s Lalu Yadav – bitter rivals for years – will lead its charge against a BJP determined to add the state to its kitty.