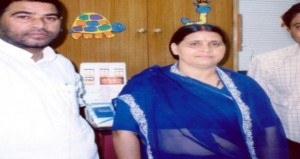 PATNA: Sadhu Yadav, a controversial former MP,  on Tuesday announced that he will contest the Lok Sabha polls from Saran seat, where his sister and former Bihar chief minister Rabri Devi is in the fray as a RJD candidate.
Sadhu, who is Rashtriya Janata Dal (RJD) chief Lalu Prasad’s brother-in-law, said that he will contest polls from Saran to challenge candidates of mainstream political parties, who have neglected its development. Sadhu alias Anirudh Prasad Yadav said that he has decided to contest polls from Saran.
“I will contest from Saran as an independent,” Sadhu told media persons here. Sadhu Yadav was a powerful leader during the Lalu-Rabri rule in Bihar.
Rabri Devi was fielded by RJD in Saran from where Lalu Prasad won in 2009. But, he had to quit after being convicted in a case of the multi-crore fodder scam last year. Sadhu deserted RJD five years ago and joined the Congress. Later, he also quit Congress and tried to join the BJP. BJP has fielded Rajiv Pratap Rudy from Saran. The Congress and the RJD early this month announced their alliance under which RJD was to contest 27 of the state’s 40 Lok Sabha seats, the Congress 12 and the Nationalist Congress Party one.