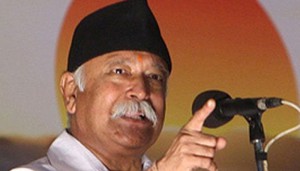 NEW DELHI : With Bharatiya Janata Party (BJP) facing a crushing defeat in the Delhi Assembly polls, the Rashtriya Swayamsevak Sangh (RSS) has reportedly decided to closely monitor the strategy for Bihar elections, scheduled for later this year, reports said on Tuesday.
In the recently held polls, while Arvind Kejriwal-led Aam Aadmi Party won 67 seats in the 70-member Delhi Assembly, the BJP managed to bag only three.
Reports stated that RSS functionary Dattatreya Hosabale met several BJP leaders, including Bhupendra Yadav, Murlidhar Rao, V Satish, Saroj Pandey and Vinay Sahastrabudhi Monday evening to discuss Bihar elections.
It is being learnt that the RSS is also against BJP’s possible intervention during Bihar Chief Minister Jitan Ram Manjhi’s floor test on February 20.
JD(U) leader Nitish Kumar last week targeted Prime Minister Narendra Modi for “encouraging” horse-trading in Bihar and alleged that the Centre “pressured” the Governor into giving the incumbent Chief Minister a long time to prove his majority so that MLAs could be “lured”.
In a frontal attack on Modi, Kumar said that the “script” to what is happening in Bihar was written after Manjhi met the Prime Minister here on February 8.”All kinds of allurement are being made to MLAs. They are being offered ministerial chairs and even BJP tickets,” Kumar told reporters.
Kumar said “license for horse-trading” was issued in Delhi and alleged BJP’s involvement. Asked if money is also being offered, he said this is being talked about everywhere.BJP on its part rejected as malicious and baseless the allegations by its friend-turned-foe and asserted it had nothing to do with JD(U)’s internal crisis.